Week Nine of our 31st Season

Changes of the Season

The N. Atlantic humpback whale mating and calving season on the Silver Bank is three quarters of the way through and with that we see many changes of whale behaviors. Where there was once many small newly born calves, there are larger more adventurous ones. Where there were once many pairs of females and their escorts, there are rowdy groups vying over what females remain. This makes for a very exciting time on the Silver Bank where surface activity is electrifying and the in-water encounters exhilarating. 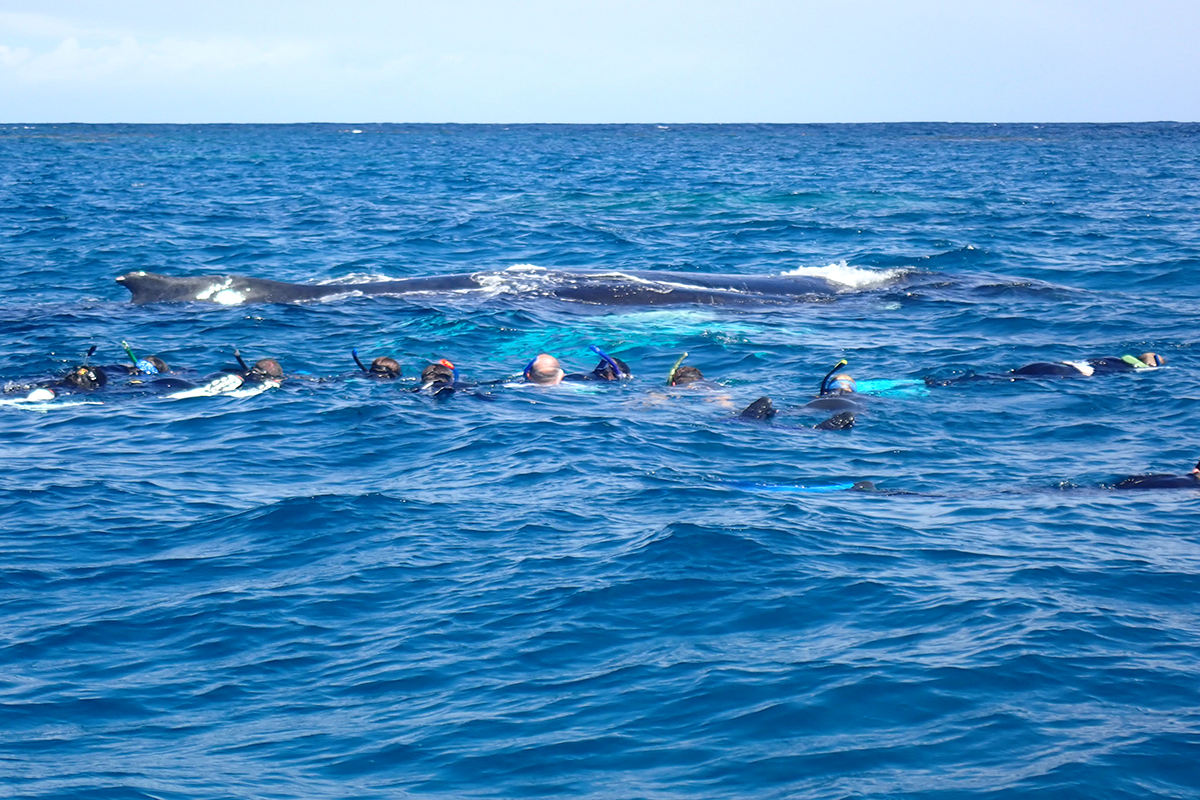 Out on the tender we are surrounded by blows. In a single instance we count four rowdy groups within one hundred yards of us. One of the groups had a total of six adult whales, likely one female and five males competing for their chance to mate. Blow after blow they appear by the tender as they come up to catch a breath before going back down below to contend. Even though the behavior witnessed during a rowdy group encounter seems chaotic and aggressive, these whales are respectful of each other, like boys on a playground. They may get a little bloody at times, but they do not aim to do permanent damage to each other. Their main goal is to outmaneuver, outlast and outperform their opponents all in an attempt to impress a female and physically be the closest to her when the group breaks apart. All at once in unison and side by side, the six whales emerge to take a breath before disappearing again. It was as if they had timed it perfectly, a chance amongst the chaos to take a break. 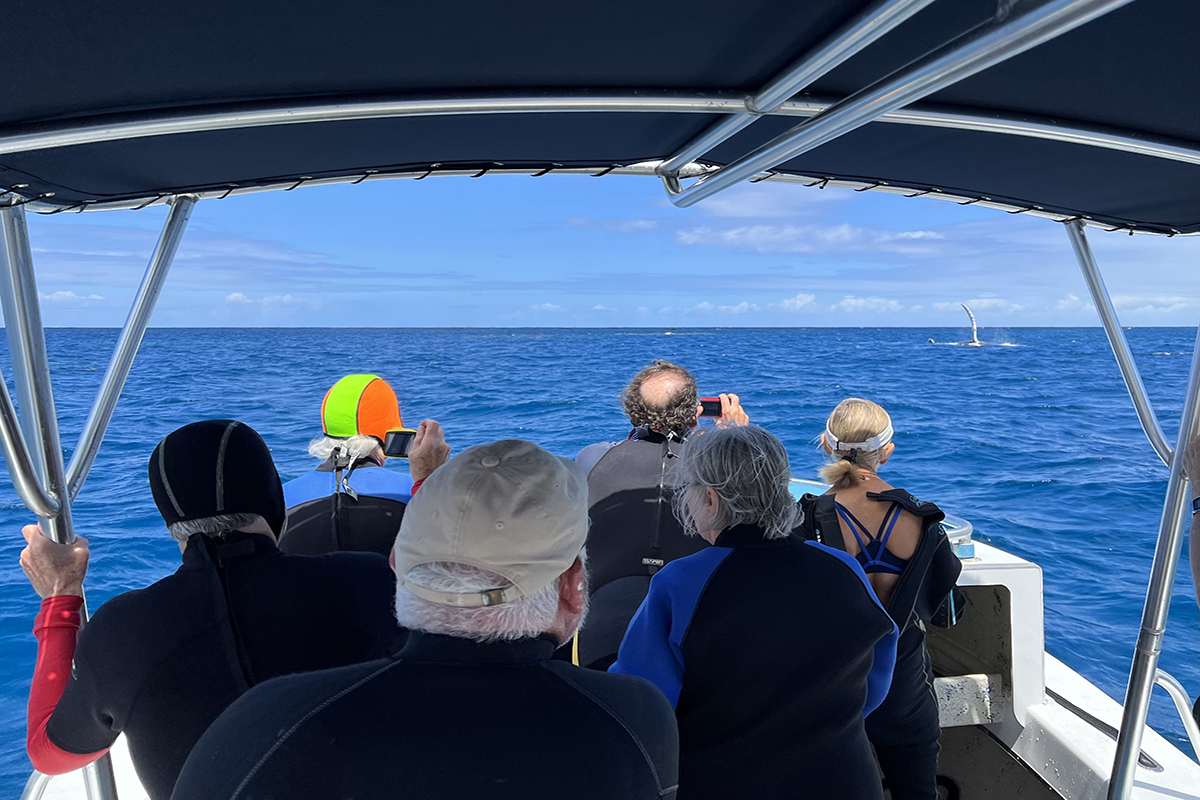 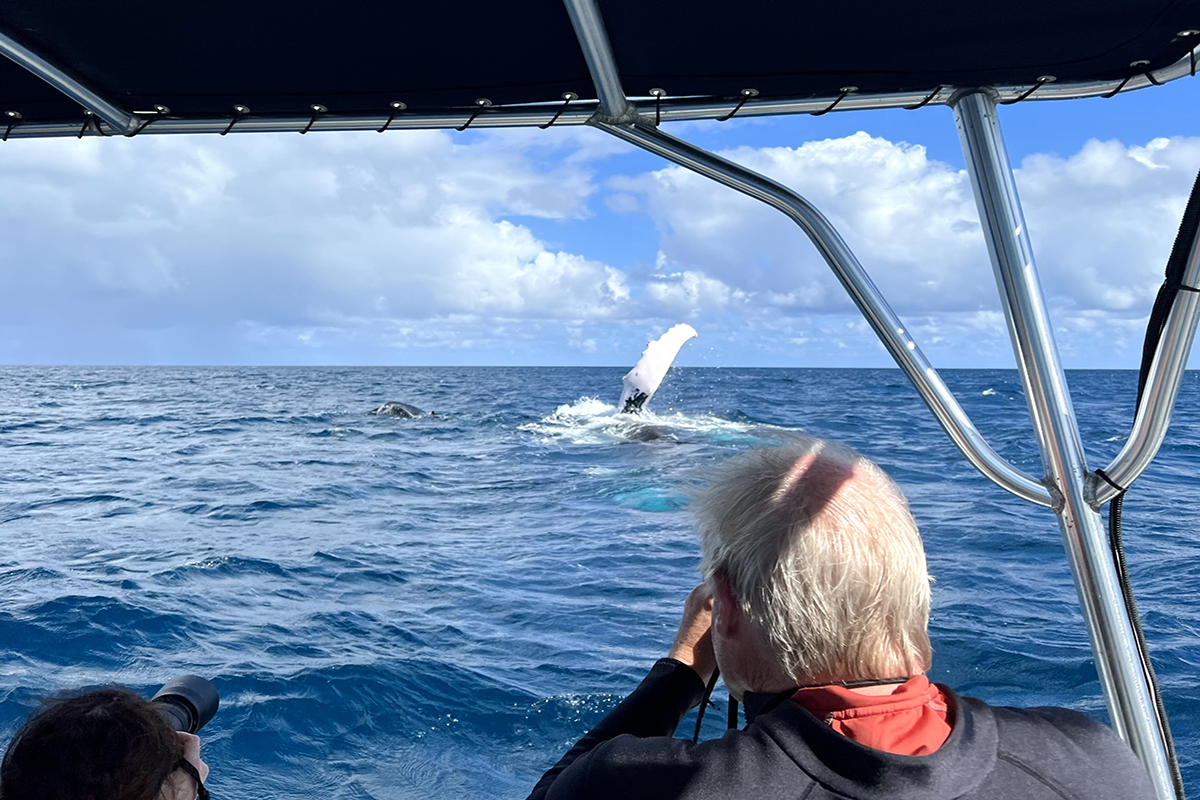 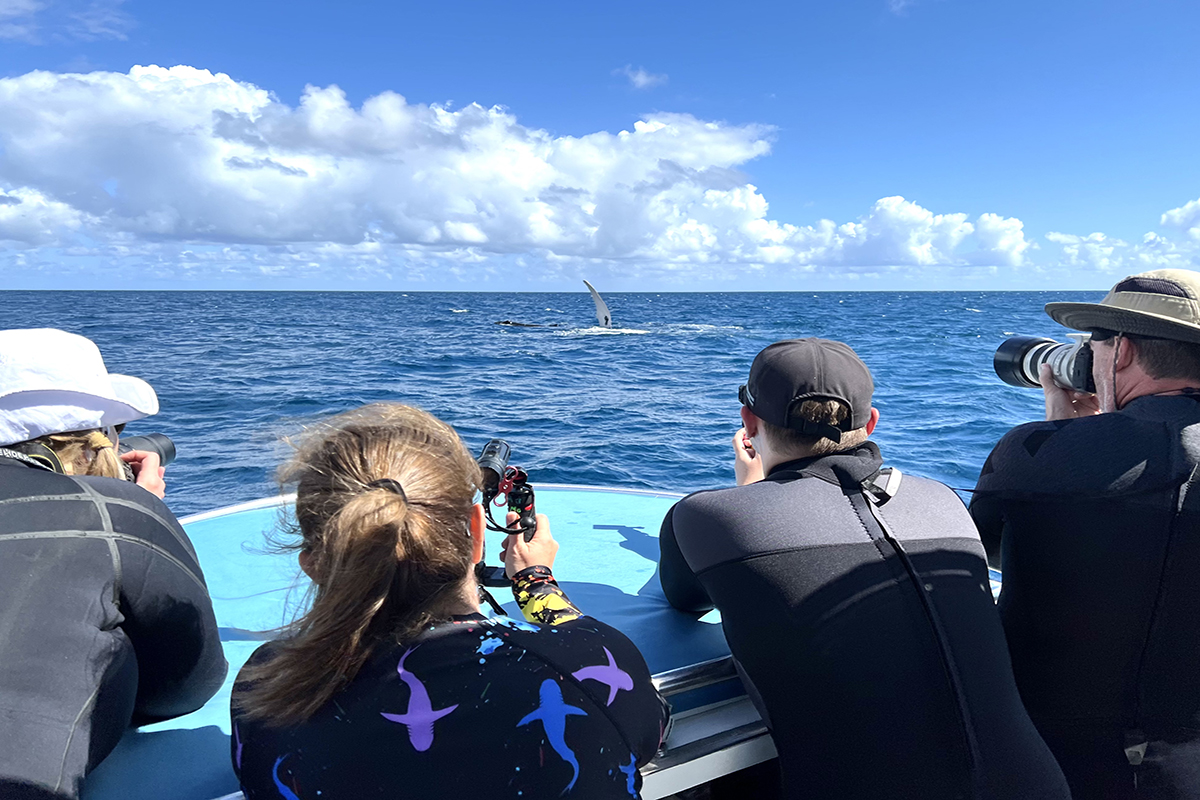 Off in the distance a calf continues to breach time and time again while the tail breaching of a nearby adult whale commands our attention. The tail breaching continues as the calf gets further and further away. It soon becomes evident to us that the tail breaching whale is the mother trying to call her adventurous calf back to her. We see more and more of this type of behavior as the season progresses and calves are now becoming strong enough to make the trip back up north to their feeding grounds. Unceasingly the mother breaches, trying to get the attention of her calf. Eventually joining back together, she does one final tail breach next to her offspring as if to reprimand. This mother and calf pair will probably make their way back north in the next few weeks and hopefully we will see the calf again in a few years when they become sexually mature and make their way back down to the mating grounds. 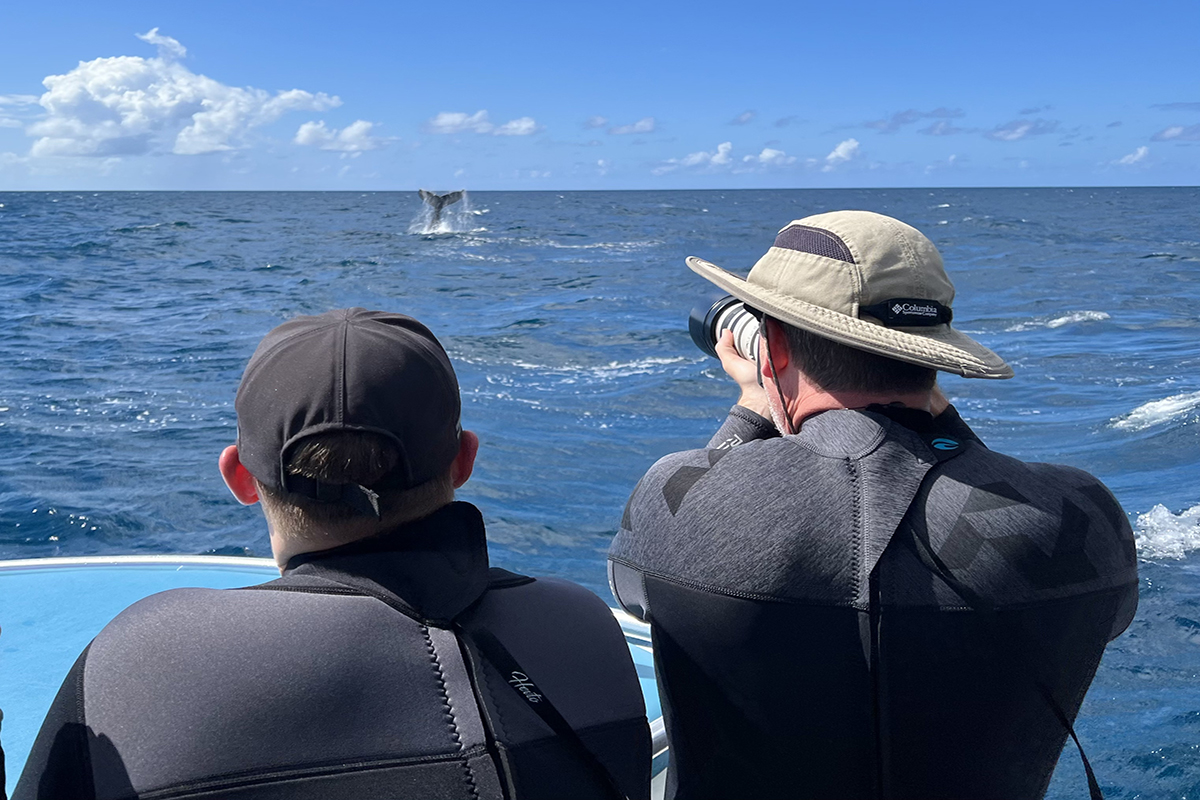 With all the rambunctious behaviors we see this time of year there is still plenty of encounters that give us a chance to get into the water for intimate encounters. On our first day on the bank, we came across a singer resting by a coral head. For just over twelve minutes, guests lay silently on the surface of the water feeling the high and low frequency outputs of the whale. Whether the singer is a male or female we can’t be sure, but this time of year we think it’s more than likely that it’s a male soliciting for a mate. Our last day of the week we were blessed to come across a mother, calf and escort among the coral heads that were curious enough to continue to circle back to the tender allowing both groups to alternate getting into the water. For twenty minutes each time, guests entered the water while the mother circled closely with her calf, sometimes tucking in her pectoral fin allowing for an even closer encounter. 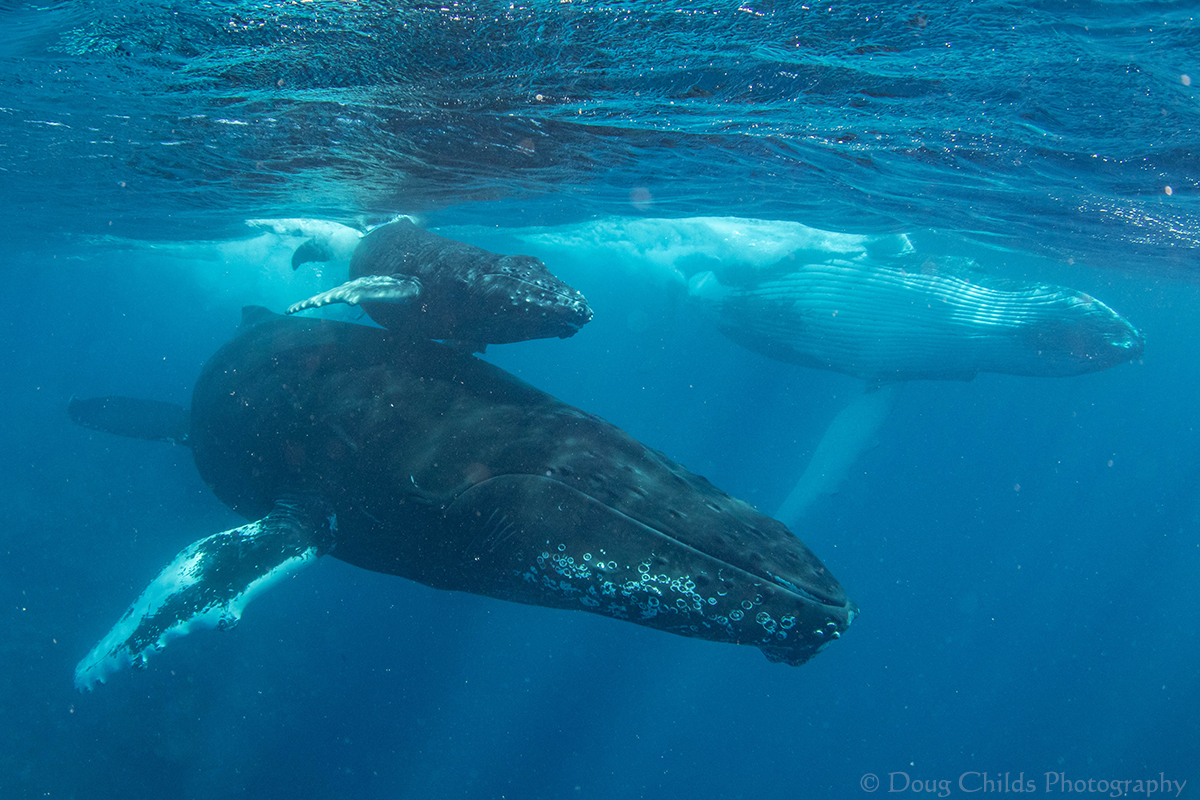 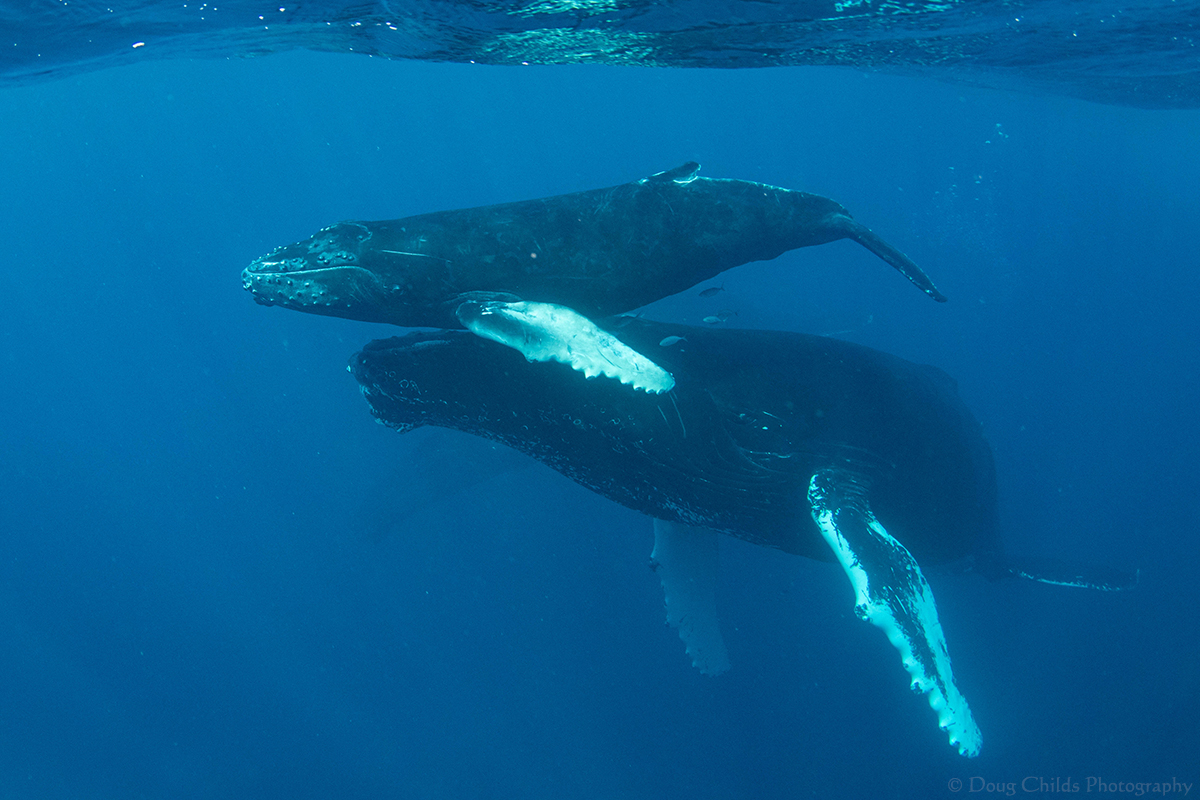 The events of the week had everyone in great spirits and our last evening was full of laughter as guests played games, chatted about their encounters and enjoyed their final meal on board of filet mignon. Three more weeks left in our season, and we can’t wait to see what the whales have in store for us. 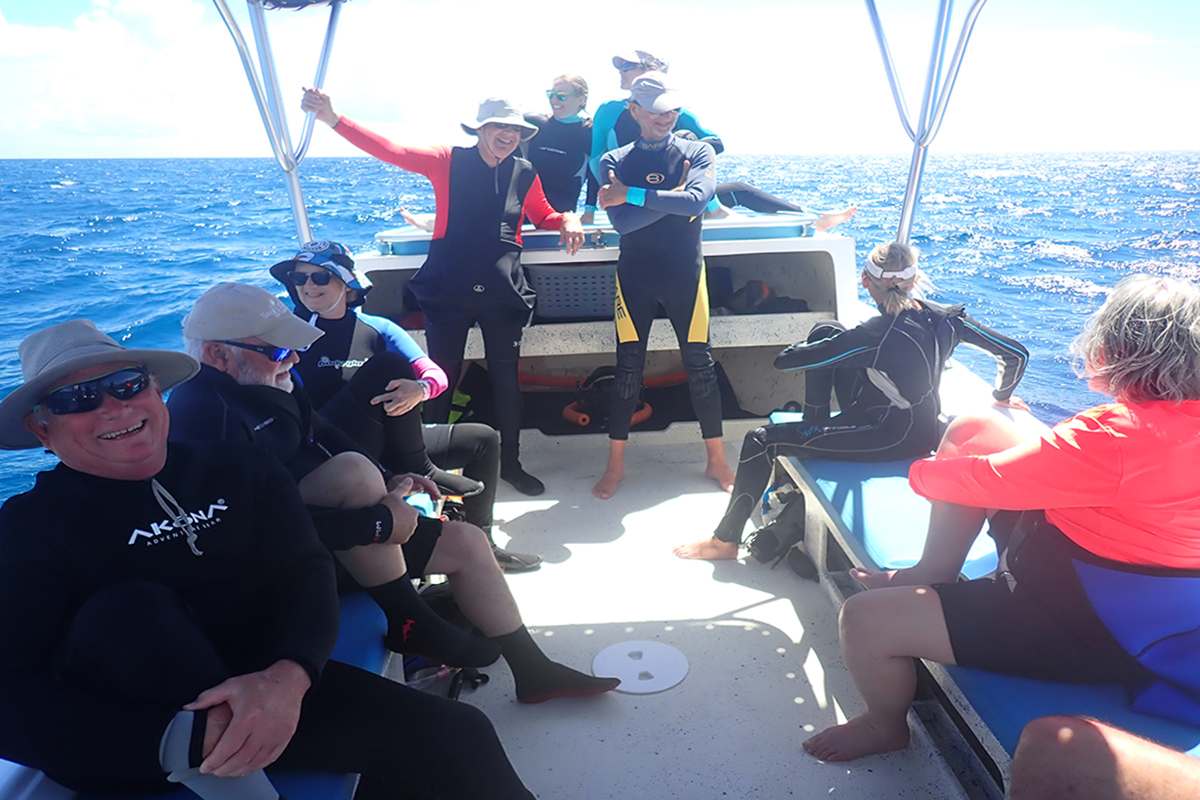