Week Six of our 31st Season

You Don’t Have To Be A Whale Enthusiast

Last week we discussed the Big 5 of the Silver Bank; 5 well known behaviors including a mother caring for her calf, a singing male, dancing whales, a rowdy group and whales breaching in unison. Although it’s not difficult to witness all of these behaviors in a week, they are not guaranteed. Coincidently, this week a guest on board had their own idea of the Big 5. He travelled here with his wife who has had an interest in humpback whales since she was young; he, on the other hand, was here to accompany her and thought he might need to create his own “Bingo Card of Behaviors” to stay entertained. His card consisted of Lob Tailing, Massive Breaching, a Rowdy Group, a Singer, a close encounter and an octopus wearing a hat, riding a whale. All of which are fairly common on the Silver Bank with exception of the whale-riding octopus. The moment we arrived at the mooring site, a mother and calf approached with multiple whales following her…a rowdy group, circling the Turks & Caicos Explorer II. We hadn’t even tied to the mooring yet and we were witnessing a rowdy group and breaching just by the vessel; two bingo boxes filled and a check on the Big 5 list. 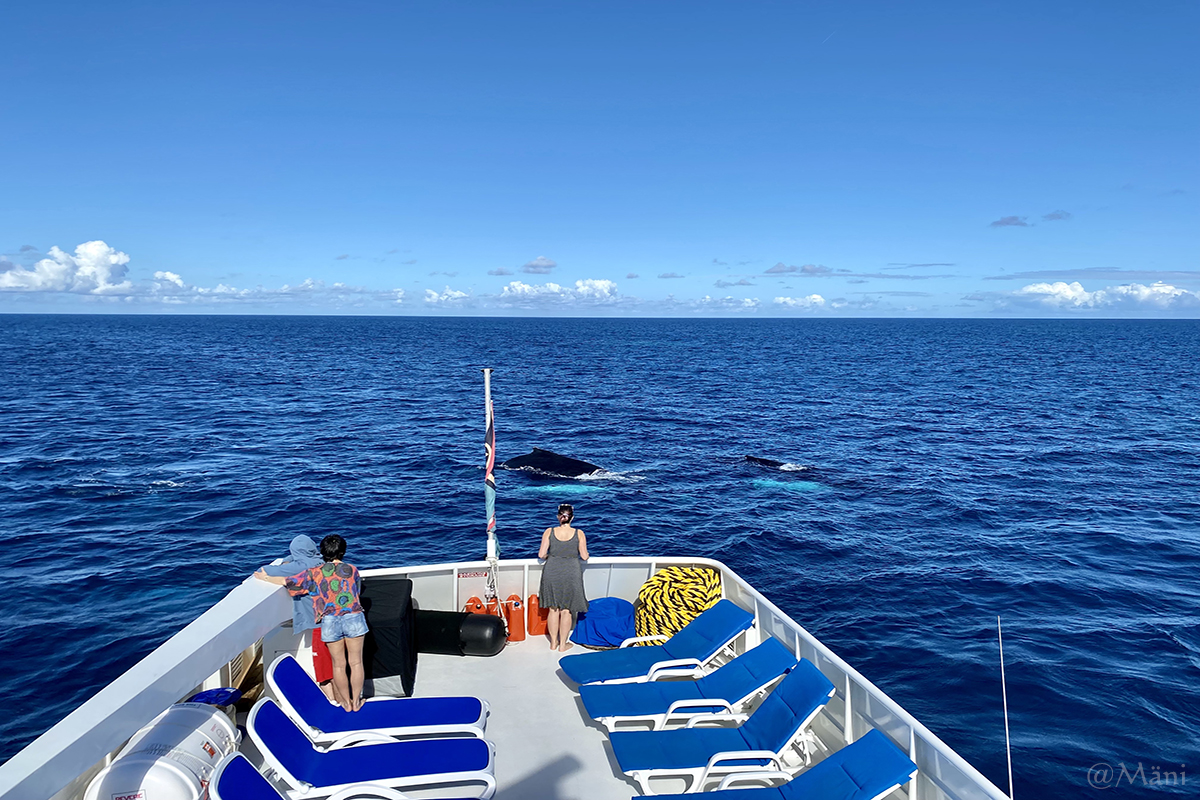 The week continued with high energy interactions and incredible in-water encounters. We are almost half way through the Aquatic Adventures season and the height of whale activity on the bank. This can be an exciting interval, but it can also mean it is difficult to find whales resting for a period of time in the same location. Whales appear to be more active when others are in the area. 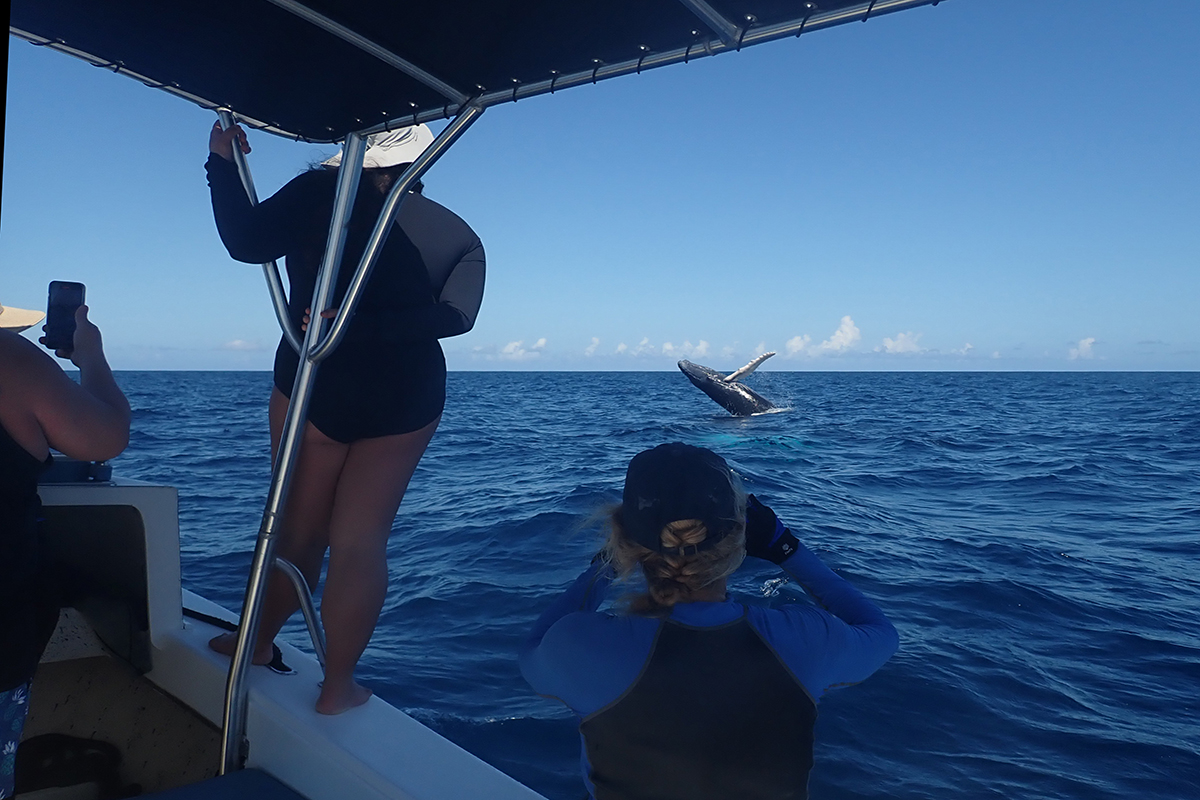 On Monday a frisky escort that accompanied a female whale was making his presence known every time we entered the water. He would rest calmly at the bottom while we rested at the surface with the female for a few moments then he would decide to place himself close and directly between us. His spy hopping and turning away the female was comical and it was construed by us as jealousy. 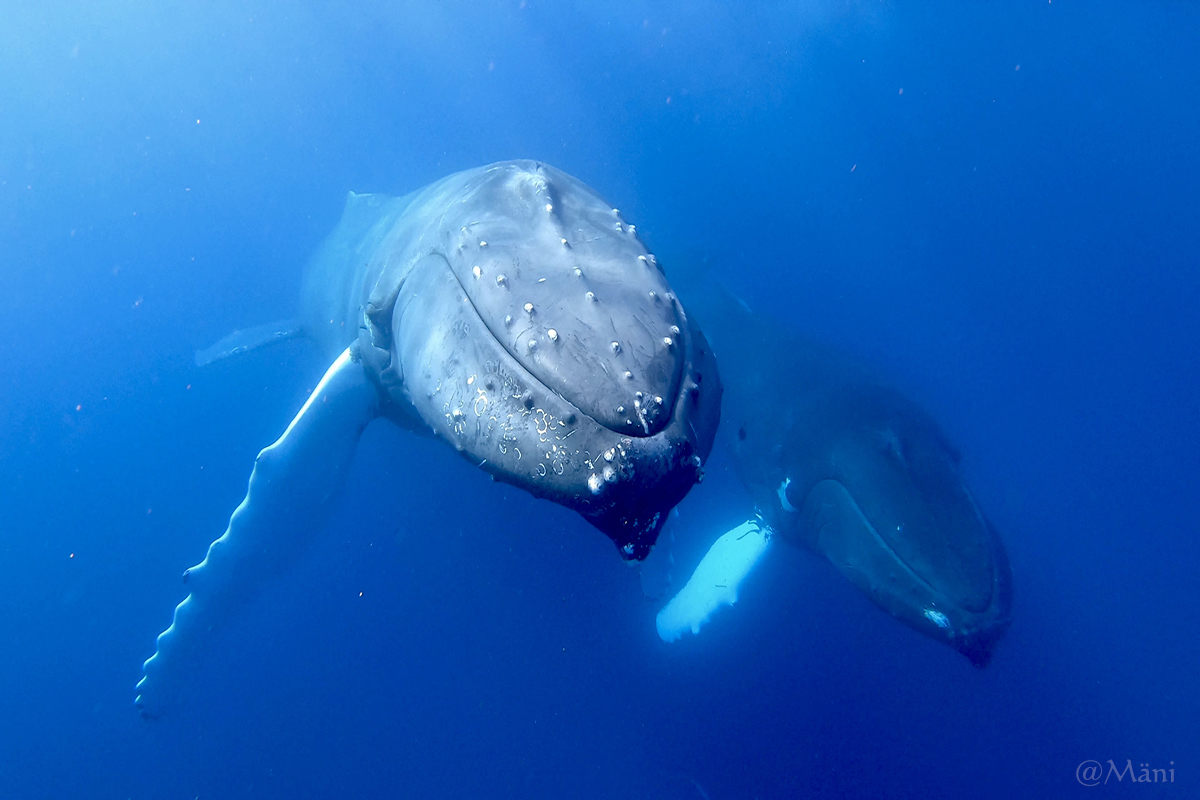 The next day we had another close encounter with a mother, calf and escort circling the boat and the group. This sort of behavior happens quite often but what made this so unique was the small pod of pantropical spotted dolphins that came to play as well. The female began to dance and the dolphins stayed alongside her and our boat, jumping through the air and zipping around the guests. After the whales departed and we climbed back onto the tender to head in for lunch, the dolphins played with our bow wake half way back to the main ship. 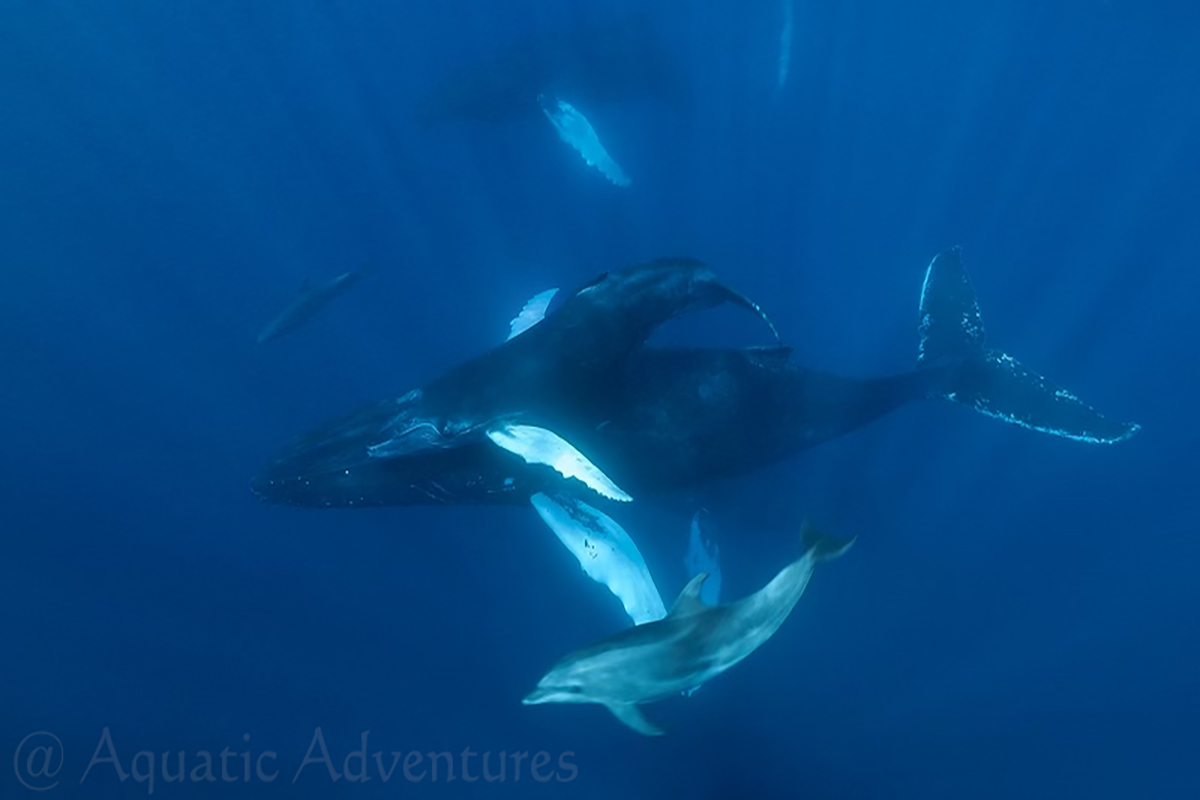 Another common sighting here on the Silver Bank is a female with an escort and a challenger, two males roughing it out for a chance to mate. We approached a mother and calf with an escort and challenger thinking it would be fun to do what we call a fly-by as they travelled past, but suddenly we heard noises through the hull… it sounded like a singer! We had not encountered one this week and it was the last behavior needed to fill our guests’ Bingo Card. We turned the vessel away from the group of whales we had been working and waited to hear the singing again. The sounds became faint and we were unable to locate the singer. “Oh Whale” as we like to say, we decided to go back to the original set of whales. Just as we were approaching, the sound became clear again, the singing louder. Could it be? It is a different tactic we don’t often see, but this challenger, seemingly a lover, not a fighter, was trying his best to serenade the female even though he had the competition of an escort. A very rare activity and a rare sight indeed. Bingo Card filled! 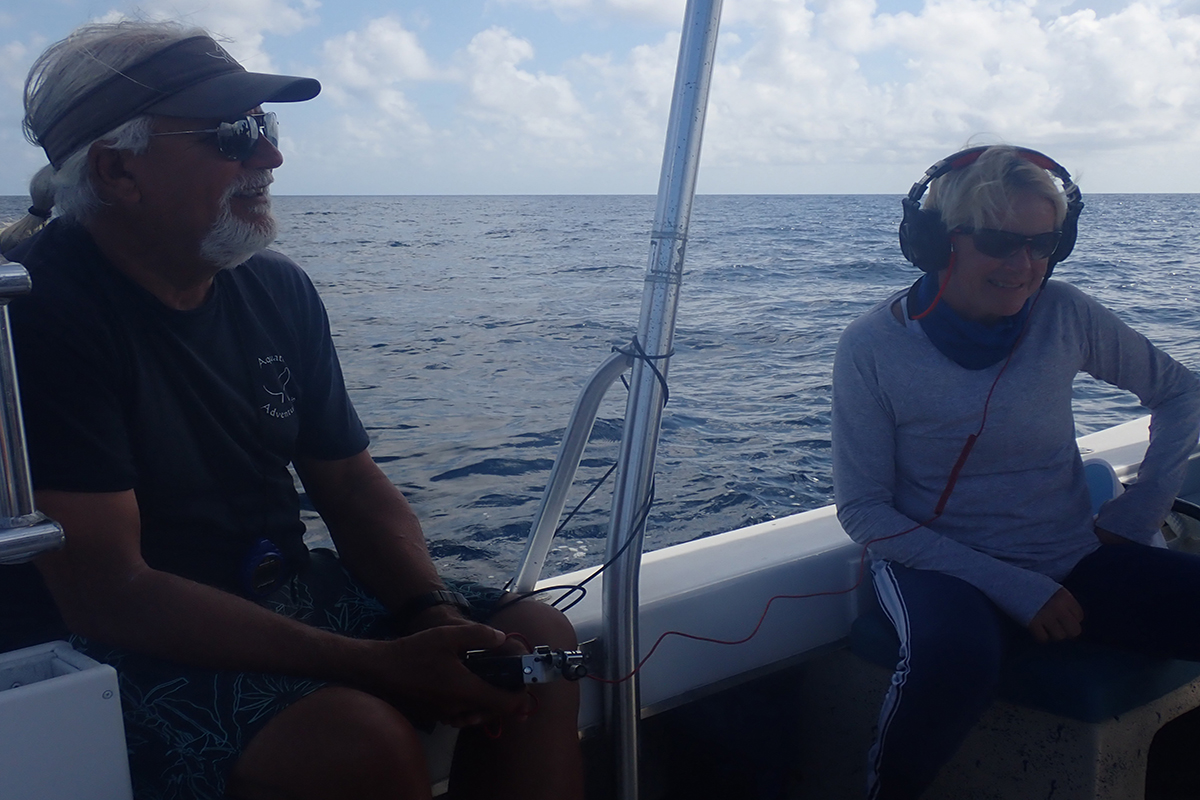 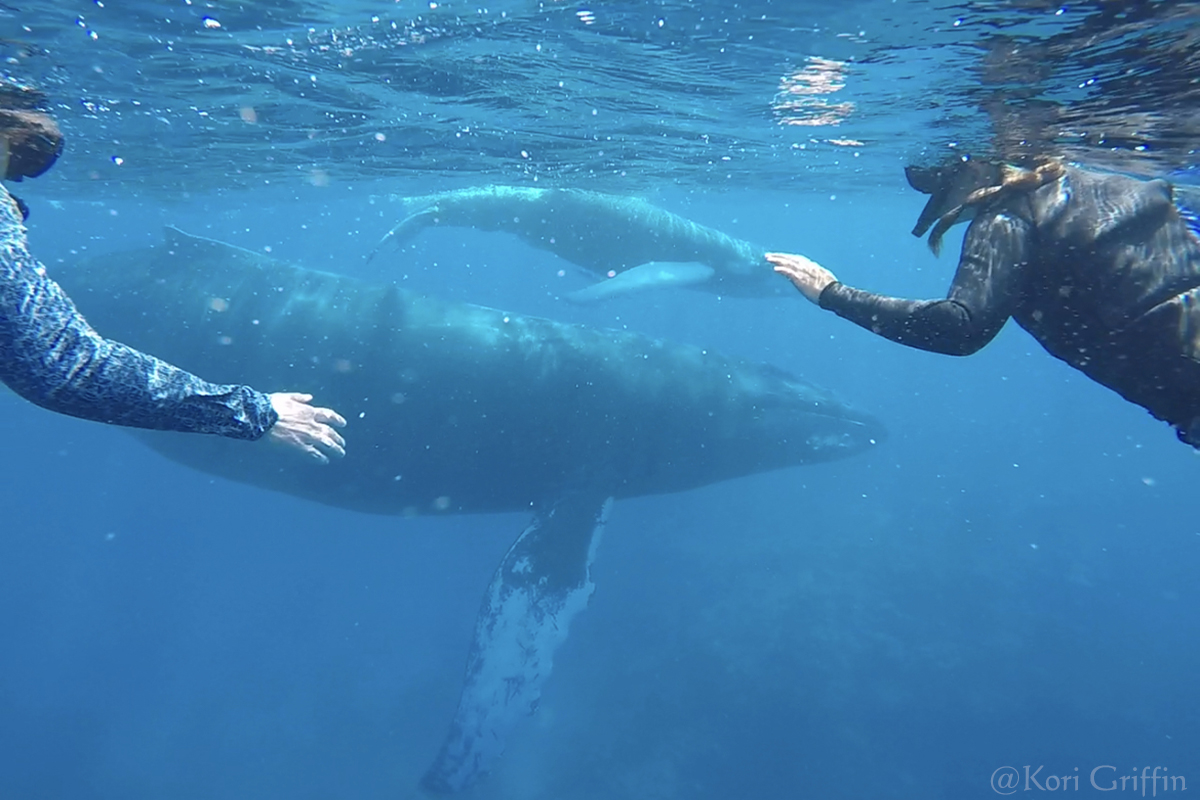 By the end of the week, we had witnessed some incredible above and in-water encounters including spy hopping escorts, dancing females with dolphins, singing challengers and yes, even some ridley sea turtles. Of course, we can’t forget the hat-wearing octopus riding the whale that appeared on the very last night. 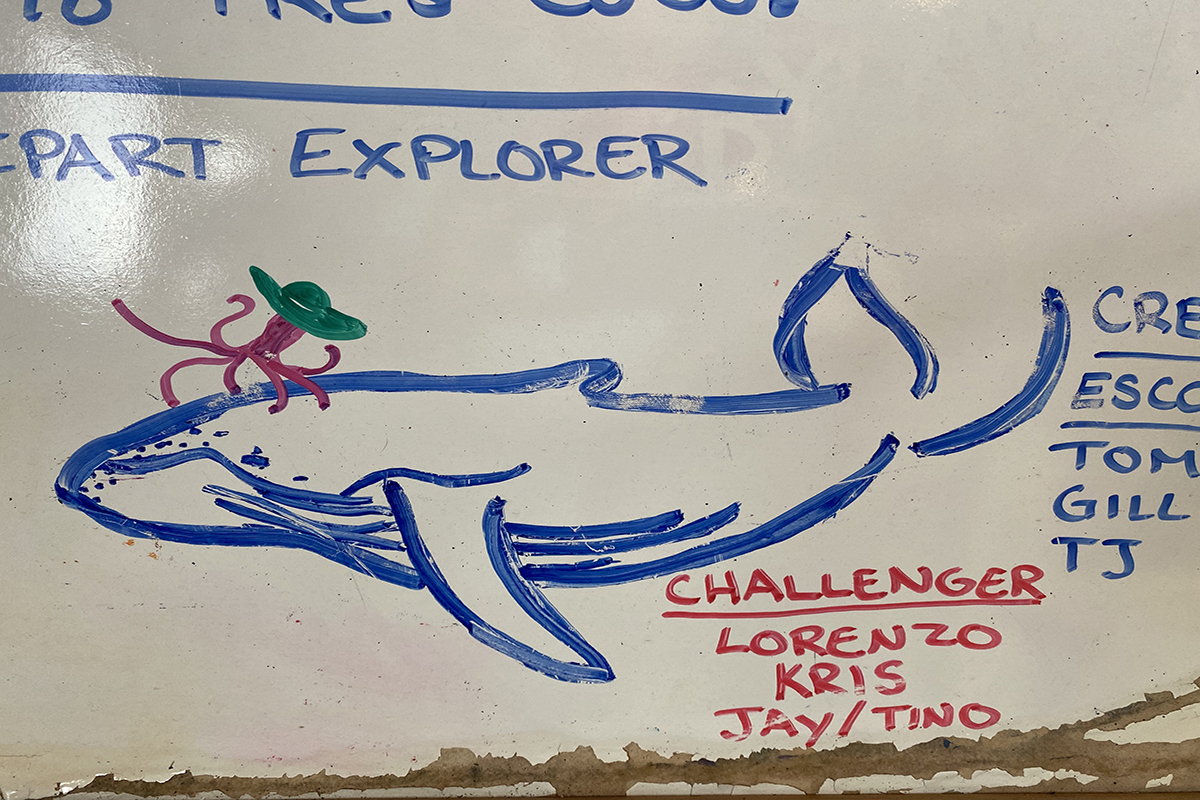 Not only had the guests succeeded in filling their Bingo Card, but when I asked that same guest who thought they needed a bingo card to stay entertained “so, how do you feel about the whales now?”, he answered enthusiastically “heck! I’m bringing my kids next time; they need to see this!”. 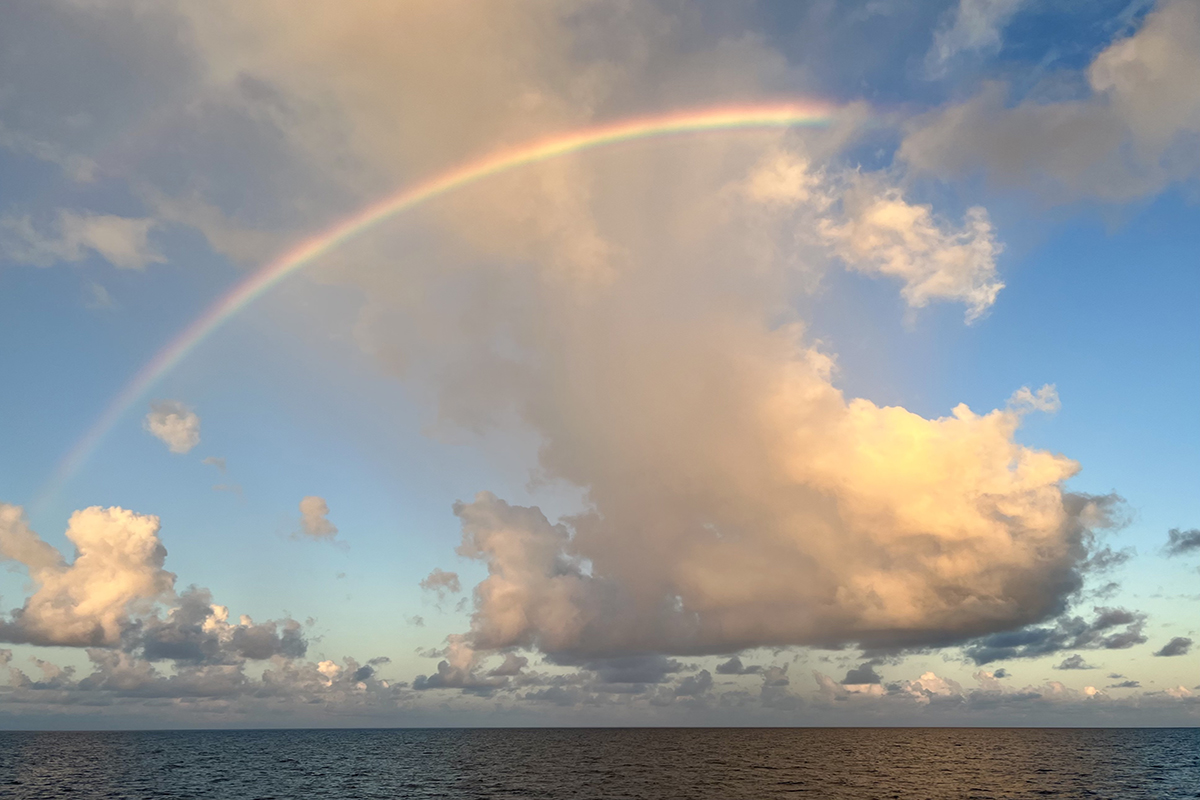