Week Twelve of our 31st Season

Here we are, the last week of the Silver Bank season for Aquatic Adventures but certainly not the last week for the whales. This week humpbacks were still being seen in Samana Bay, another mating and calving location south east of the Silver Bank, so we had positive expectations when we arrived Sunday that some of the whales from the adjacent banks and bays would be passing through on their way north. We had also had a report from the Center for Coastal Studies that many mother and calf pairs had made it to their feeding grounds. The timing of the migration north varies for each whale, where some whales from earlier in the season have made the trek back and others have stayed; the reason for this variation remains unknown. Regardless of the reason that some whales remain later into the season, we are grateful. 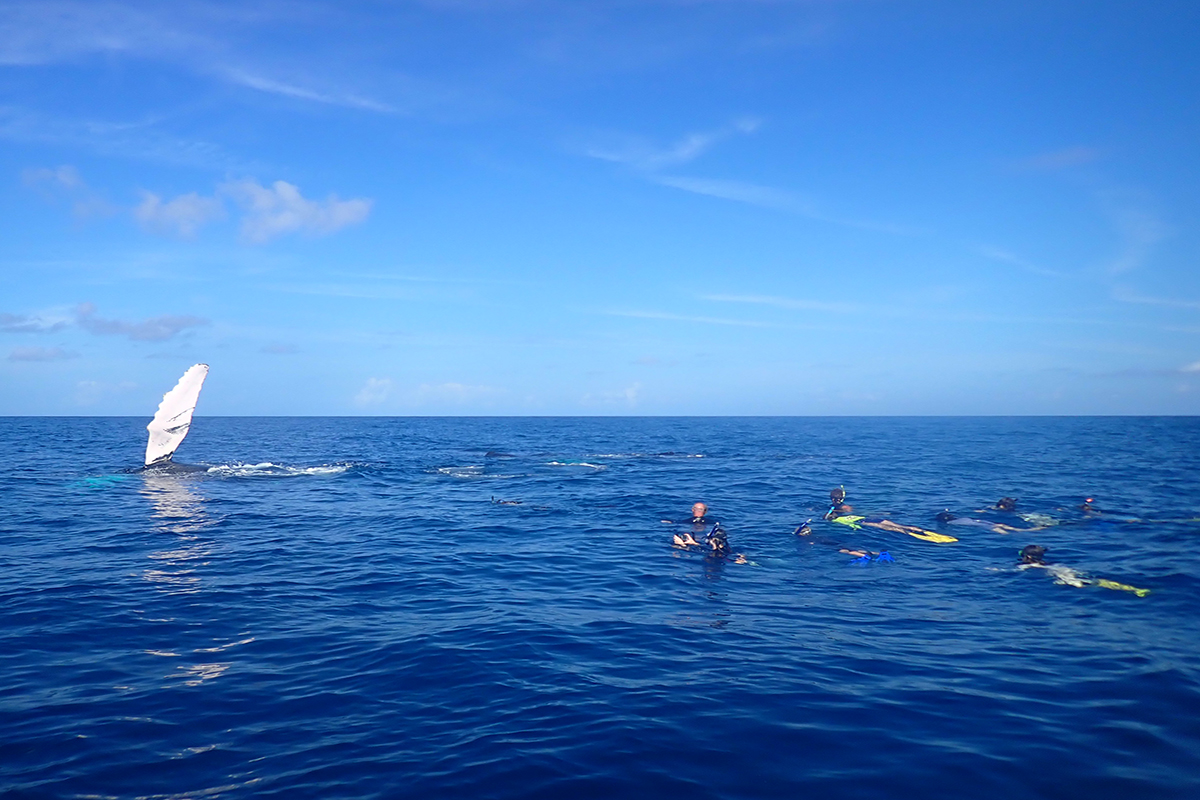 Day one and our expectations are already blown, quite literally, out of the water! A mother and calf with escort stayed with us for hours in the afternoon, allowing both groups of guests to spend many minutes with them at a time. She laid on the surface with a fairly young calf while the escort trailed behind and just below her. At first the escort seemed wary of us and sent us a few warning signs, fin slapping and trumpet blowing, but once he calmed and the people were in the water, he seemed to relax, allowing us to get a closer look. With the sun at our backs, the calf laying on the mother’s nose taking a break from swimming and rolling over onto her dorsal side, was perfectly lit for some amazing underwater photography. If you weren’t taking photos it was just as amazing to see the connection between a mother and her calf being nurtured. Perhaps we will see this pair in a few weeks’ time up north in the feeding grounds. 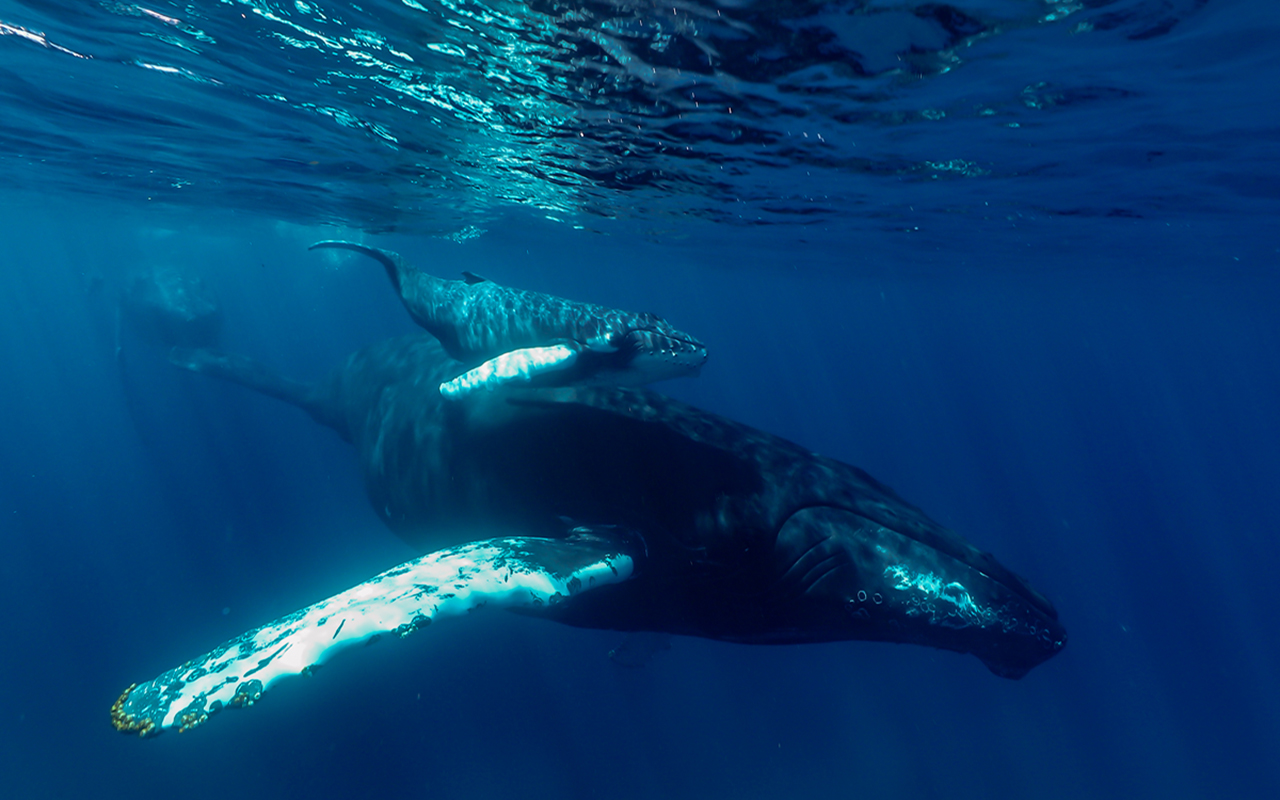 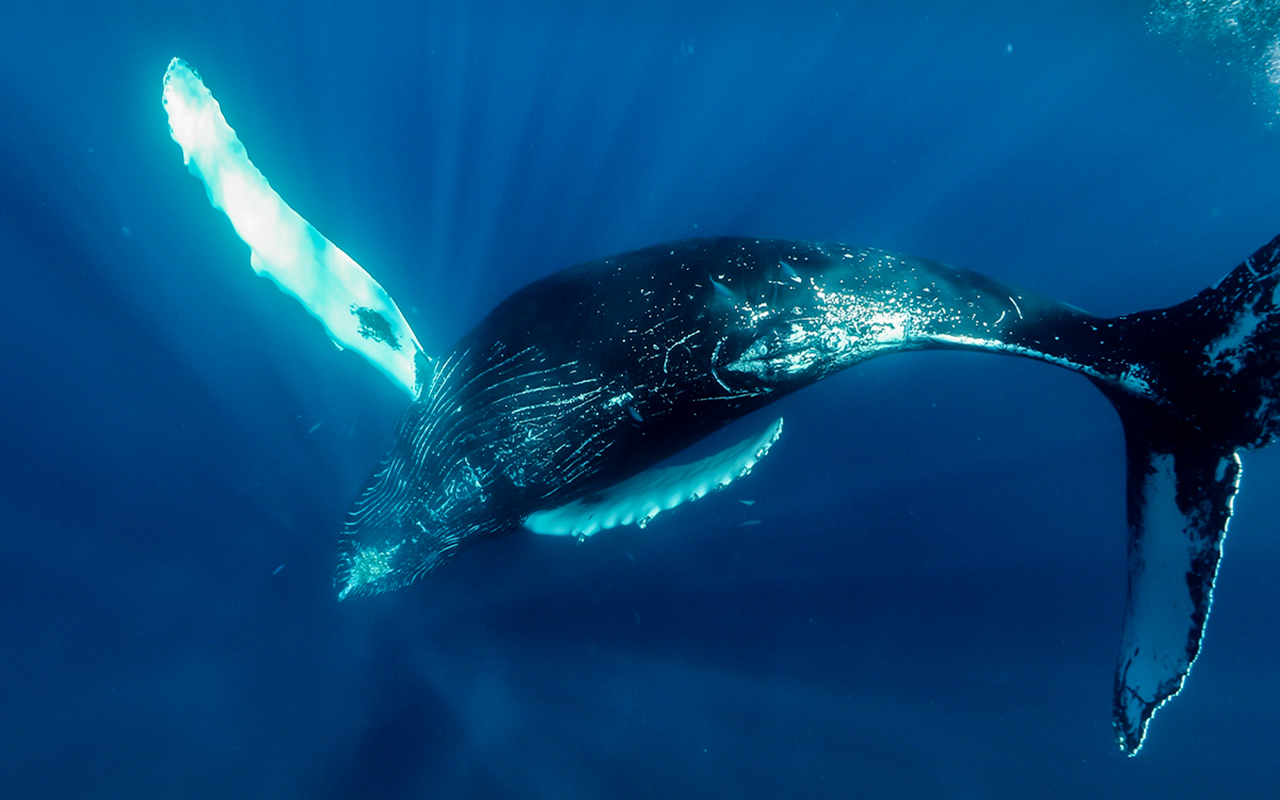 Not surprisingly we came across a few rowdy groups this week. As whales begin to head north, the females become few and the males still vying for a chance to mate are in high competition mode. In one particular rowdy group we counted a total of 8 whales. Much too active and aggressive to even consider getting into the water with them, but still amazing to watch from the tender. Another group of whales that could potentially become a rowdy had four males with a resting female. The males circling her were presumably taking a break from competing so we took advantage of the chance to get into the water with them. There are certain behaviors that guests are not allowed to enter the water with and one of these is a rowdy group; the only exception is if the group is in a resting period and all high energy activity has ceased. It is a quick encounter but by staying close to the tender above the female it is interesting to watch as the multiple males circle her waiting to start up the competition again. 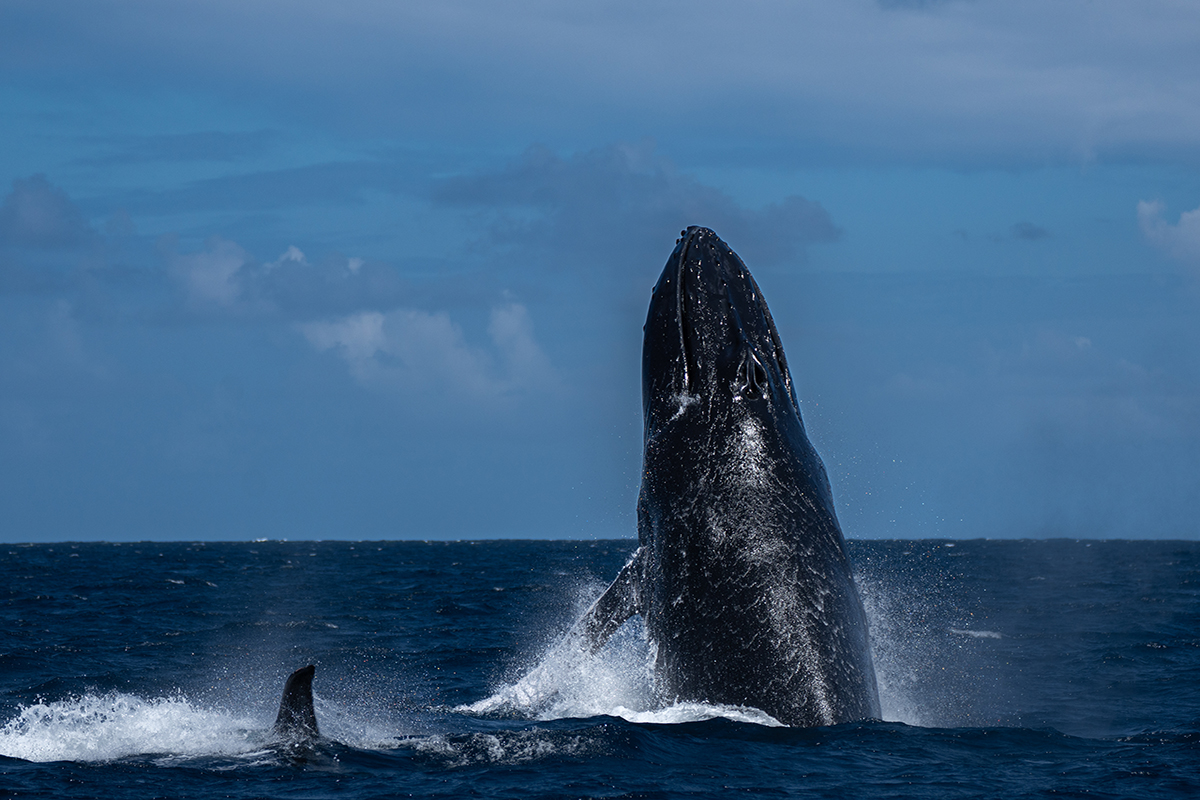 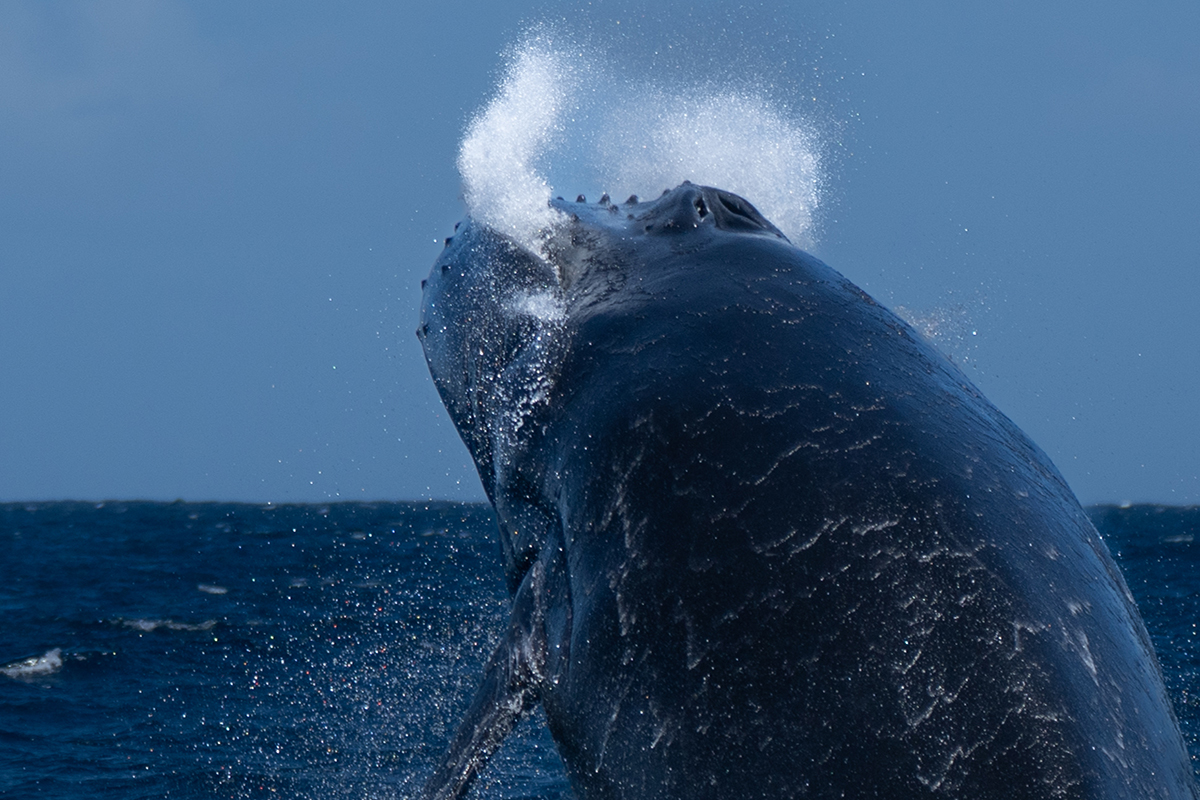 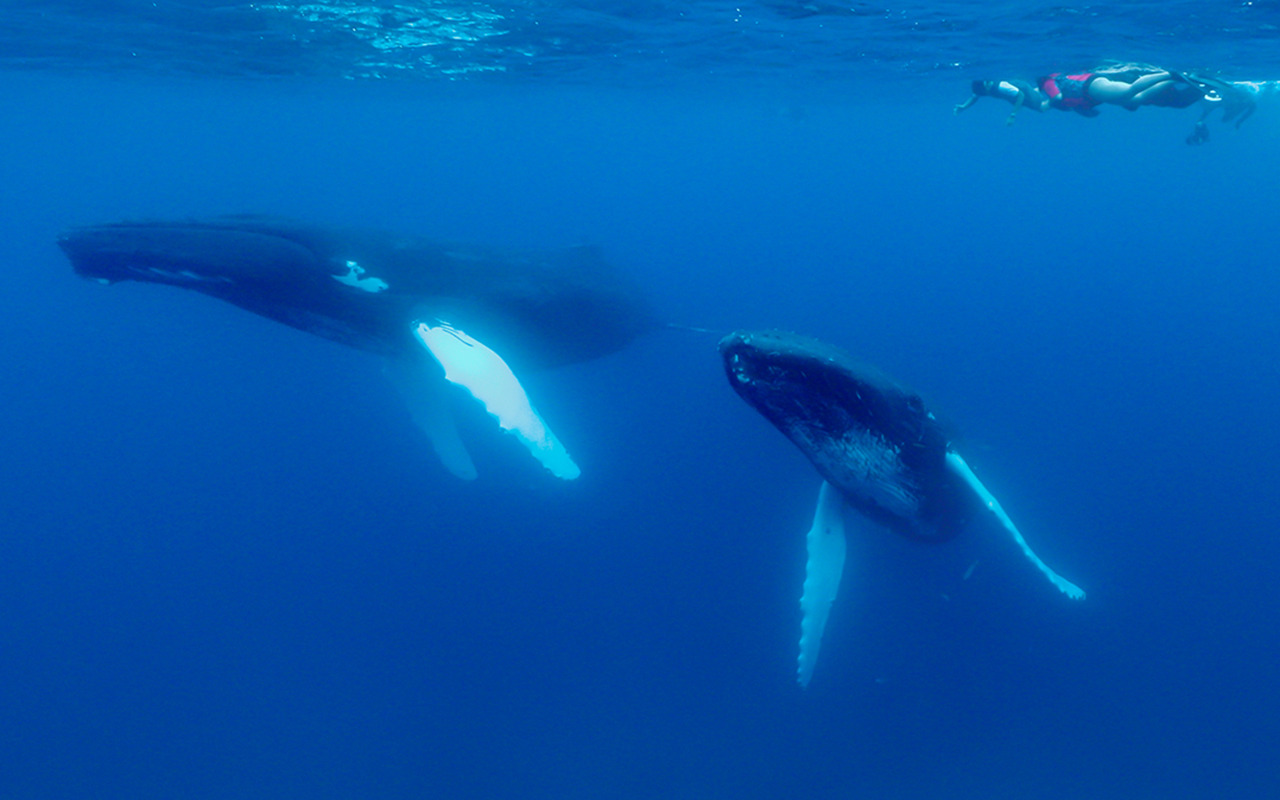 Later in the week we came across another mother and calf pair, but this calf seemed to be more mature. Our first glimpse of the whales was the adult appearing out of nowhere, in a full spinning head breach. Time and time again she launched herself high above the waves and came crashing down in an epic display of acrobatics. Three times she did this and then the calf came barreling out of the surf, throwing itself with such momentum its full body came above the waves. Clearly this small whale had practiced this maneuver quite a few times. It’s difficult to say why this mother and calf pair have stayed so long on the Silver Bank. Perhaps the mother wanted to get her calf as strong as possible before heading north, or perhaps the orca scars on its dorsal and fluke are an indication of previous trauma and she is cautious about the journey. One day soon though she and the rest of the humpbacks here in the Dominican Republic will make the 1500-3000km journey back to their feeding grounds, hopefully to return again next year with full bellies and some with new calves. 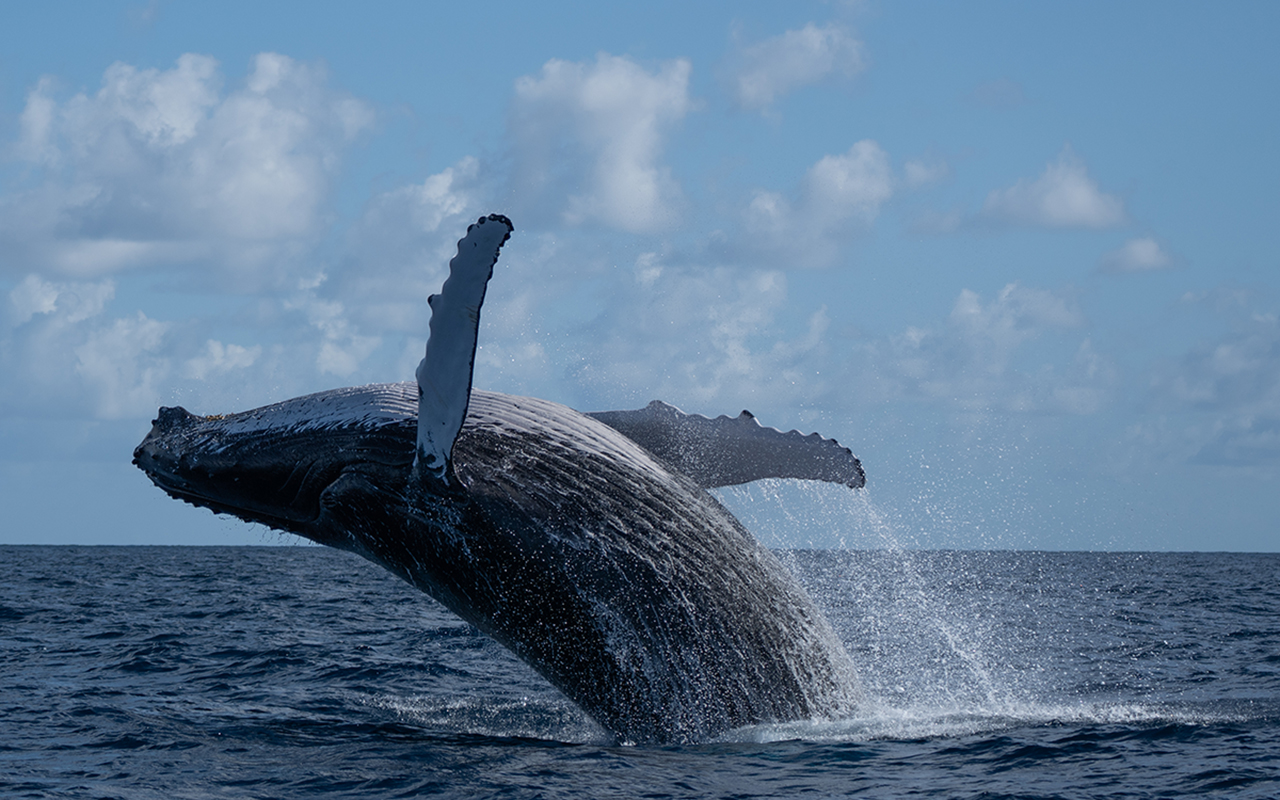 But now it is time for us to pack our bags and also return home. It has been an incredible season! We have met some amazing people, had some breath-taking encounters and even received some positive fluke matches from the Center For Coastal Studies (Glacier, Scythe, Touchdown, Twine and Viking). We all feel so grateful; to be back on the Silver Bank, for the incredible whales and for the wonderful guests that truly make this a magical experience. See you next season! 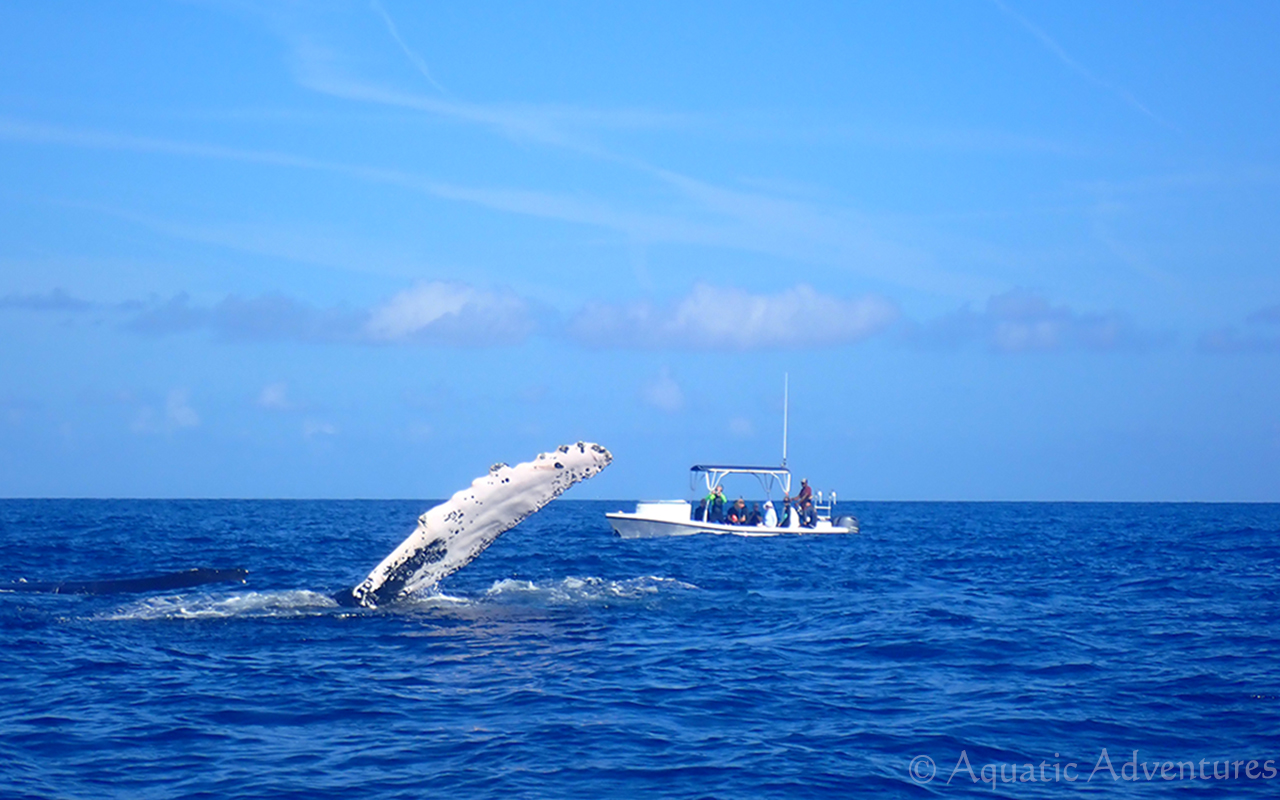