Week Six of our 30th Season

Up Close and Personal with Mothers and Calves

Here we are, the end of week six and officially half way through the season! The winds picked up to the high twenties and low thirties at the beginning of this week, deeming it unsafe to go out on the tenders unfortunately. All aboard had Chef Jo’s amazing meals and plenty of surface activity viewed from the Turks and Caicos Explorer (TCX) to keep up the good energy. Jo has been the chef on the TCX during whales for 5 seasons. She has honed her skills and prides herself on providing delicious and nutritious meals three times a day, seven days a week. She has travelled the world from Asia to Europe, experimenting with different cuisines and brings them back to the Silver Bank every year to share with us. Whether you are gluten free, vegan or have another special dietary need, she is more than happy to accommodate everyone. 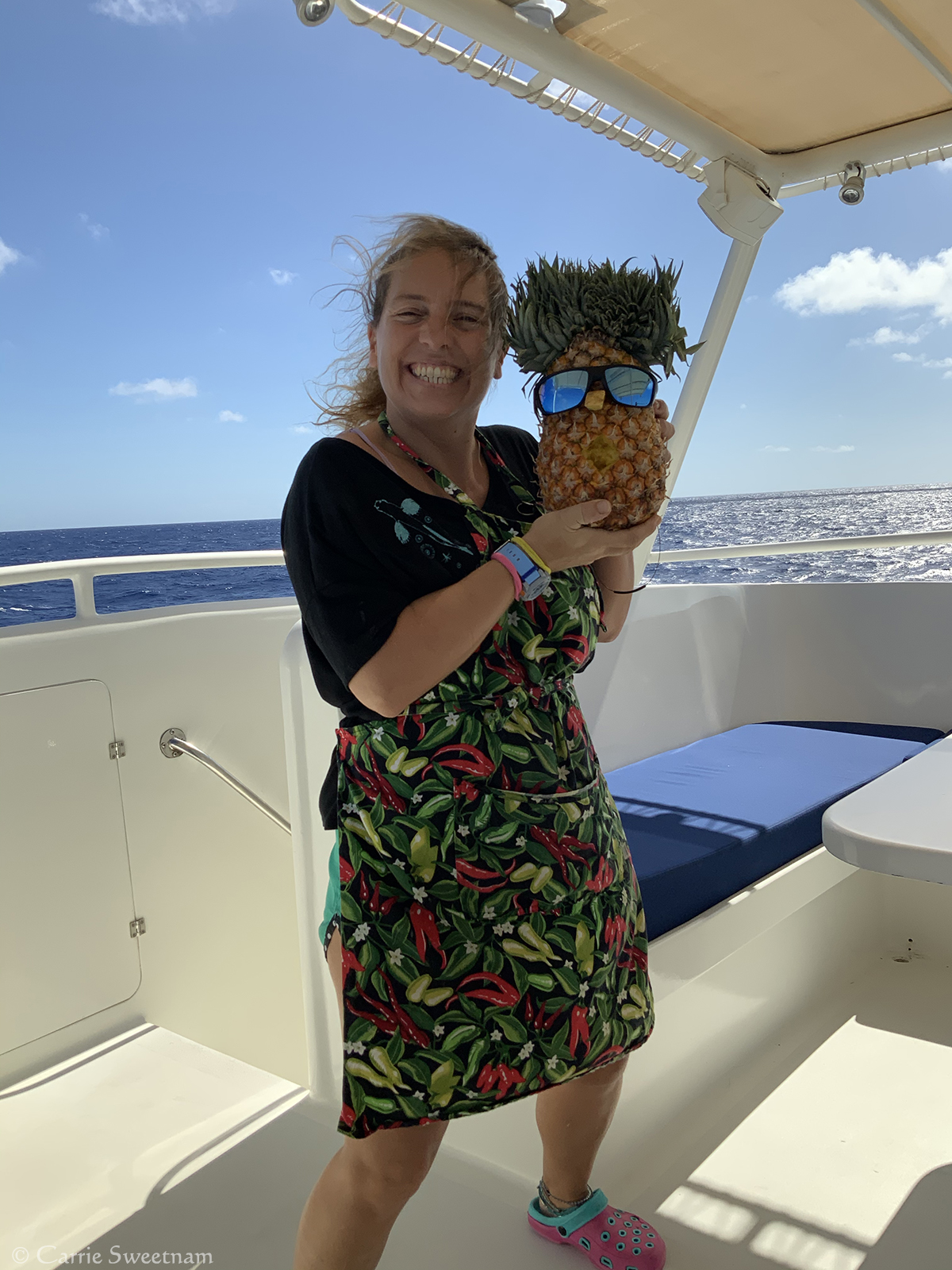 The winds came down slightly on Tuesday and we gratefully loaded the tenders around 9:30 AM to go out for the day. Blows quickly dissipate when winds range between 18 and 20 knots and dorsal fins disappear in the choppy seas, making humpbacks difficult to spot. We spent the day telling jokes, snacking and spotting for whales. Enthusiastically, guests were practicing their field spotting skills “2 O’CLOCK, 4 BOAT LENGTHS!” they would yell out over the wind. “BREACH, ON THE HORIZON!” It was an exciting day of surface activity and choppy seas. Exhausted and hungry we travelled back to the mother ship around 5:00 PM for happy hour and one of Jo’s delicious meals. Everyone was looking forward to tomorrow when the winds were forecasted to calm. 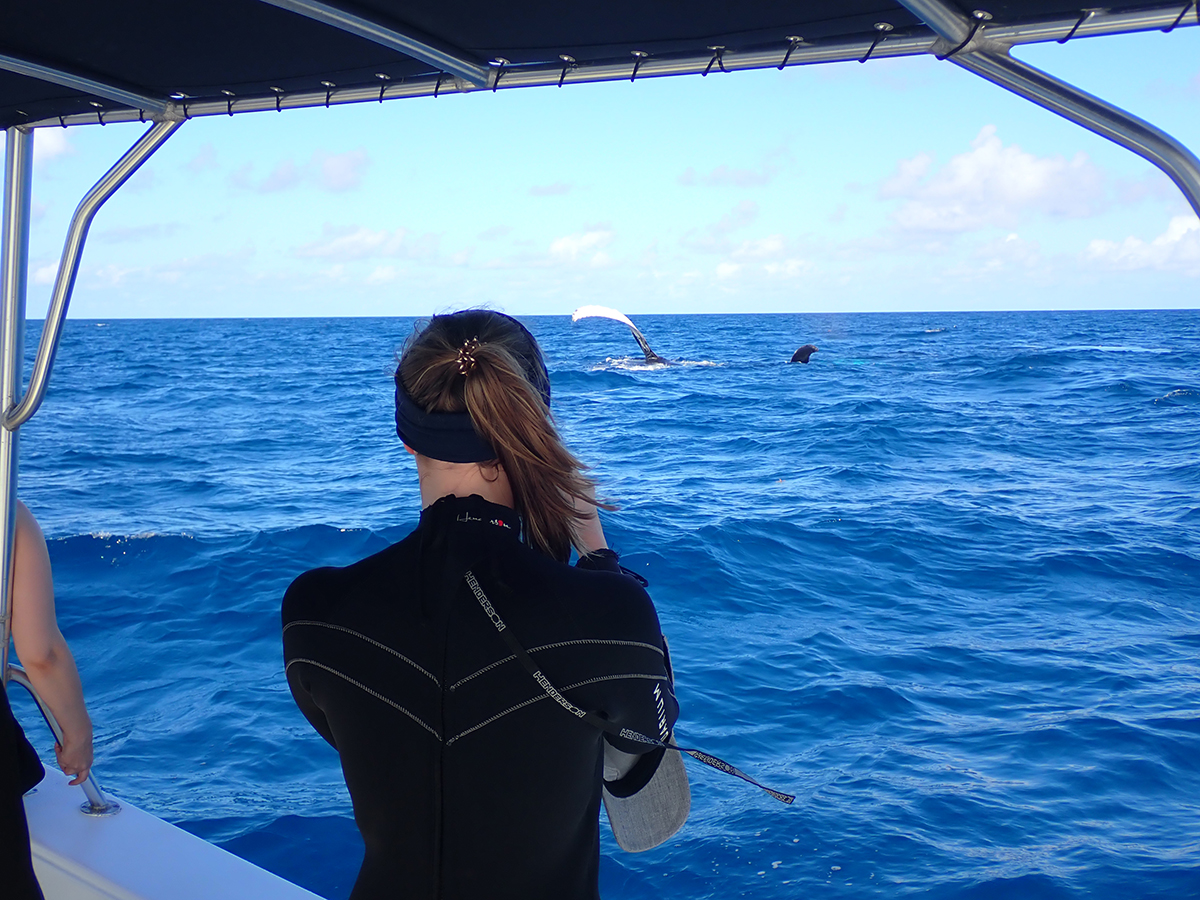 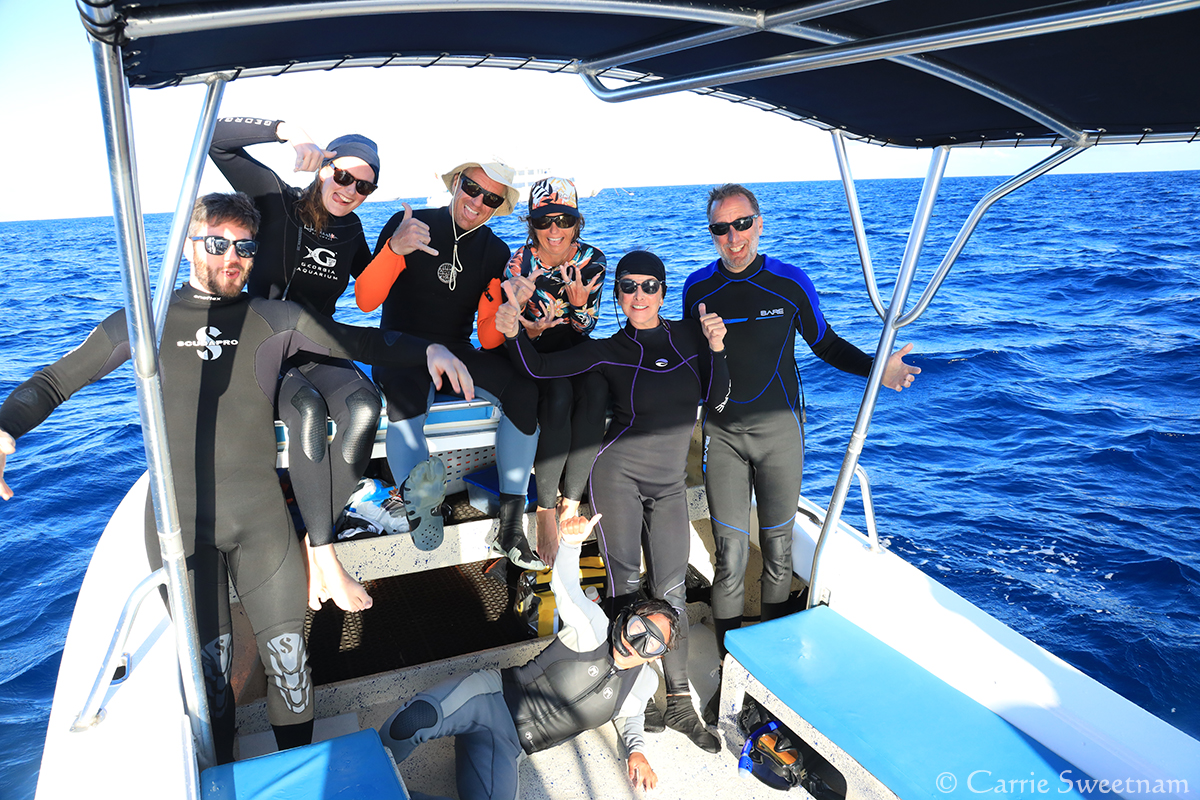 Moments after the lines were cast off and the tender navigated away from the TCX on Wednesday, Captain Denise spotted a settled mother and calf close by. Excited energy filled the boat, with all aboard hoping this might be their chance to get in the water with a humpback whale after waiting patiently for the past few days! The winds had decreased to fifteen knots, seas had calmed and the visibility was fair. The scout entered the water and signaled to the tender that the mother had indeed settled. Quickly yet quietly the guests donned their gear and entered the water. There, resting vertically (head up) in the water just twenty feet below the surface, ventral pleats displayed towards us and pectorals spread like a spiritual statue atop a mountain, was a forty to fifty foot humpback whale and her calf. The calf seemed to be practicing a variety of skills; opening its mouth and testing buoyancy control resting vertically alongside its mother. Two and a half hours later we boarded the tender, amazed at the generosity of these whales who allowed us to spend several quality hours observing them. 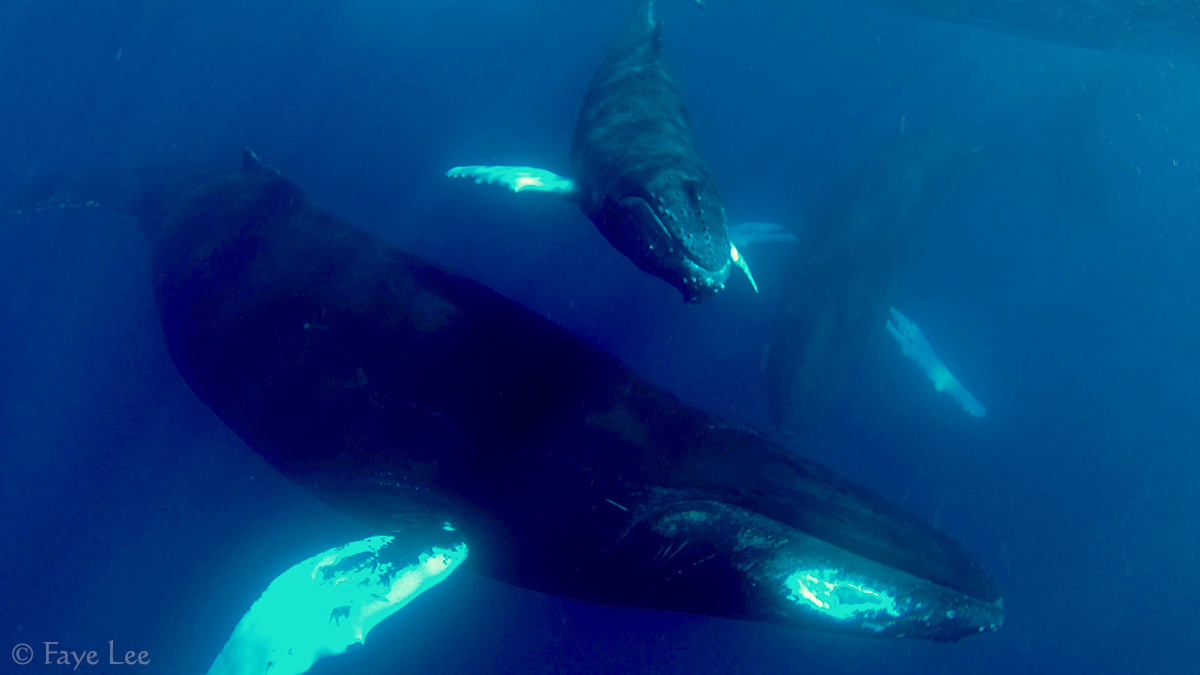 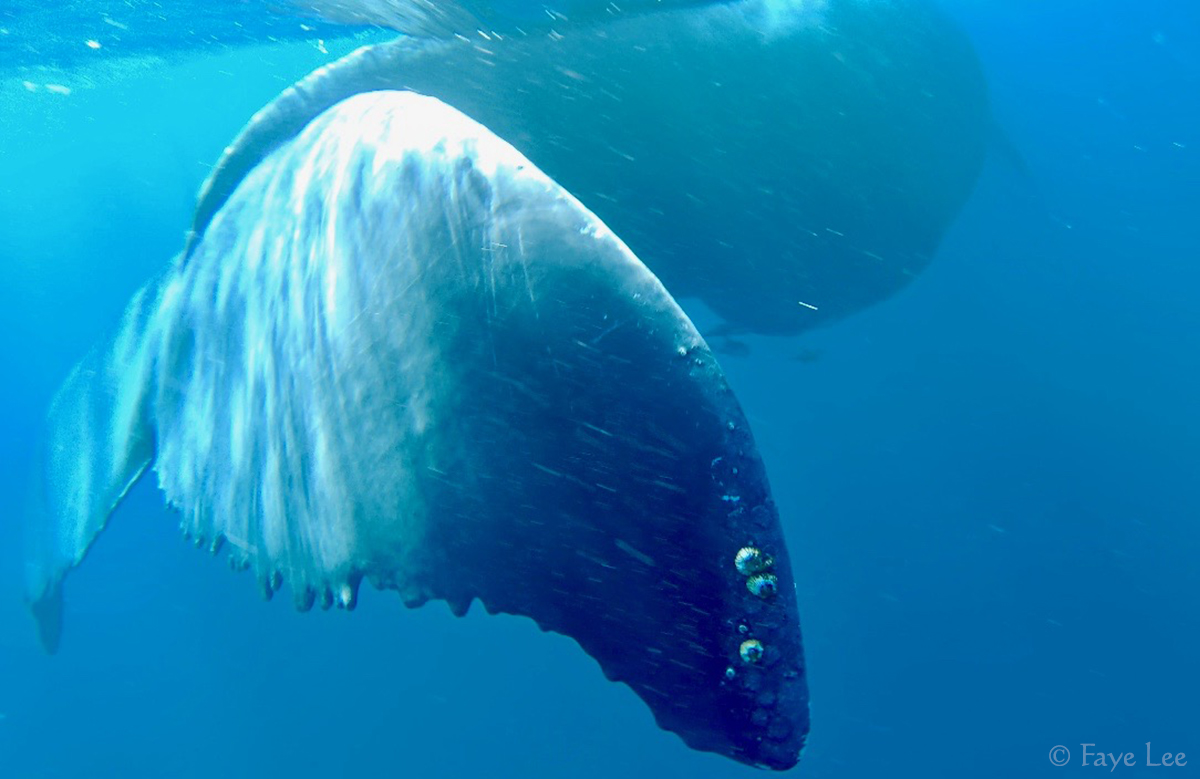 The next day we were again blown away by an incredible encounter with a mother, calf and escort. Our first encounter that morning was a fly by, where guests exit the tender and float passively as the whales swim by. Most agreed that after Wednesday’s experience, if that was all they came across today they would go home feeling blessed. 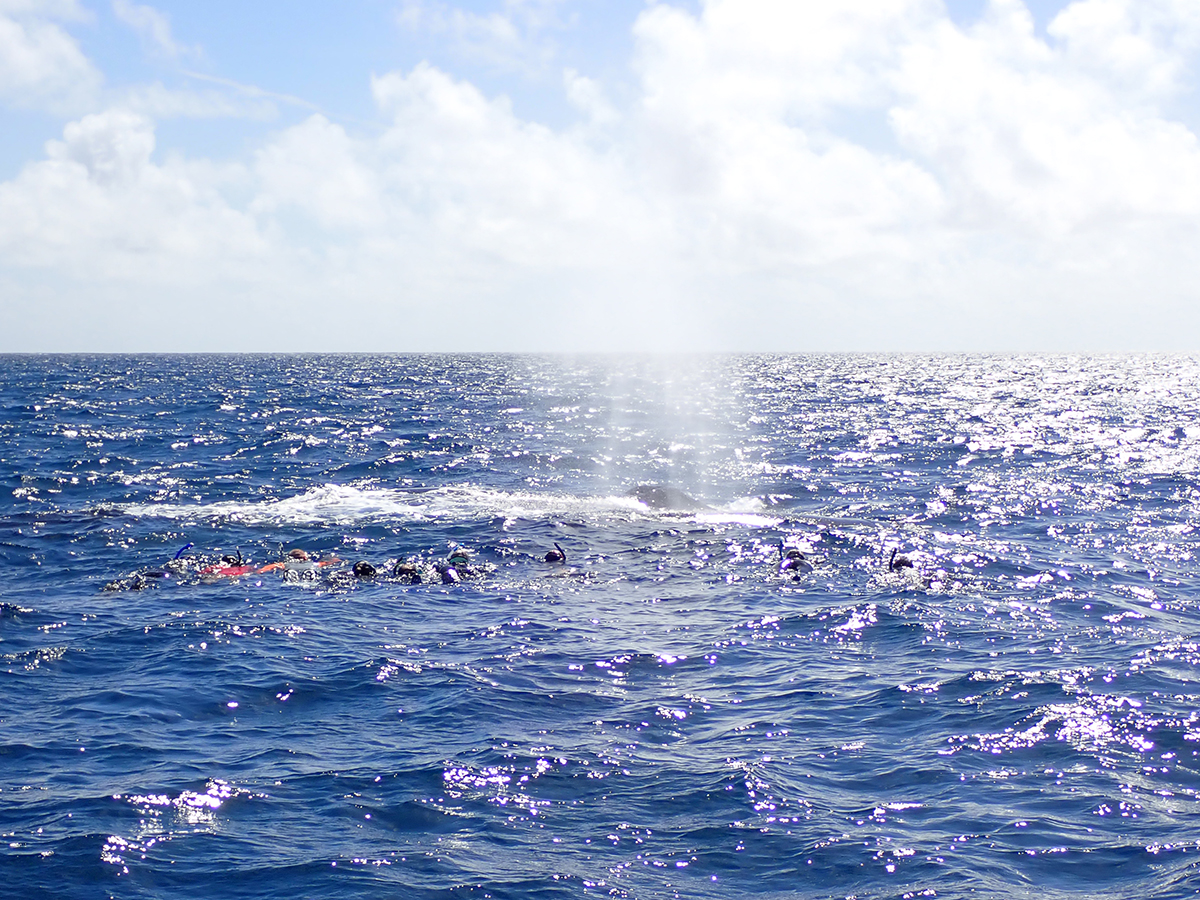 Nature had something else in mind. Again, after lunch, we entered the water with a settled mother, calf and escort. The mother was shallow, resting perhaps twenty feet under the surface. We kept our distance as the calf came up for breaths in order to gain the confidence of the mother. Time and time again after the escort returned from his perimeter checks, all three whales came up for a breath and would turn directly to the group, coming in for an intimate look, so close that we could feel the droplets of water vapor on our heads from their blows! Guests backed up as the curious whales came even closer and eventually dove down below us. Just like the previous day, the encounter continued on like this for two hours! “You really wouldn’t believe it, unless you were there yourself,” one guest remarked. 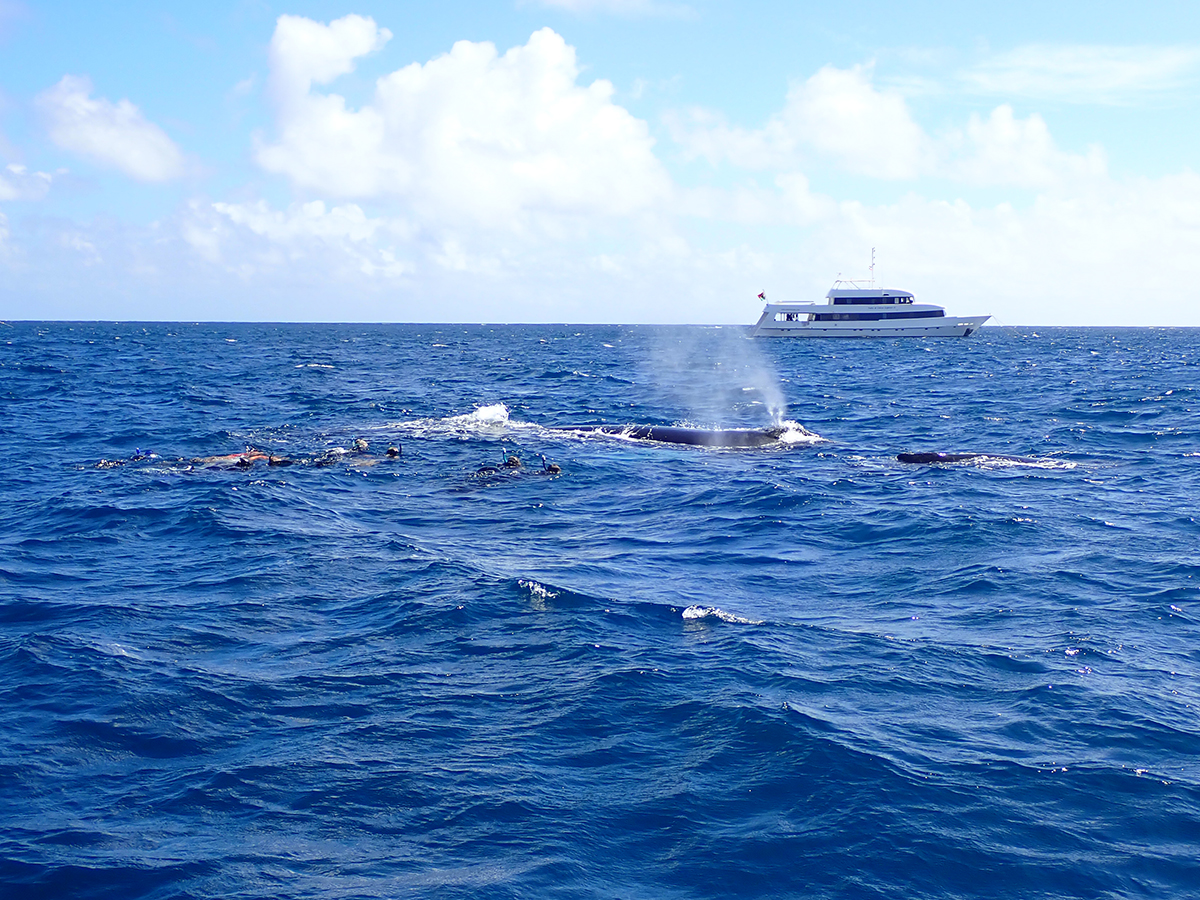 Later that evening, back on board the TCX, guests compared their videos of the experience. At the time we couldn’t hear anything but the waves crashing overhead and our own breath but when listening to the video captured by some of the guests, you can clearly hear a singing whale close by. This nearby whale probably kept the escort on high alert, causing him to do multiple perimeter checks.

The Silver Bank never ceases to amaze, and only half way through the season, we can’t help but wonder what more may be in store for us over the next five weeks! 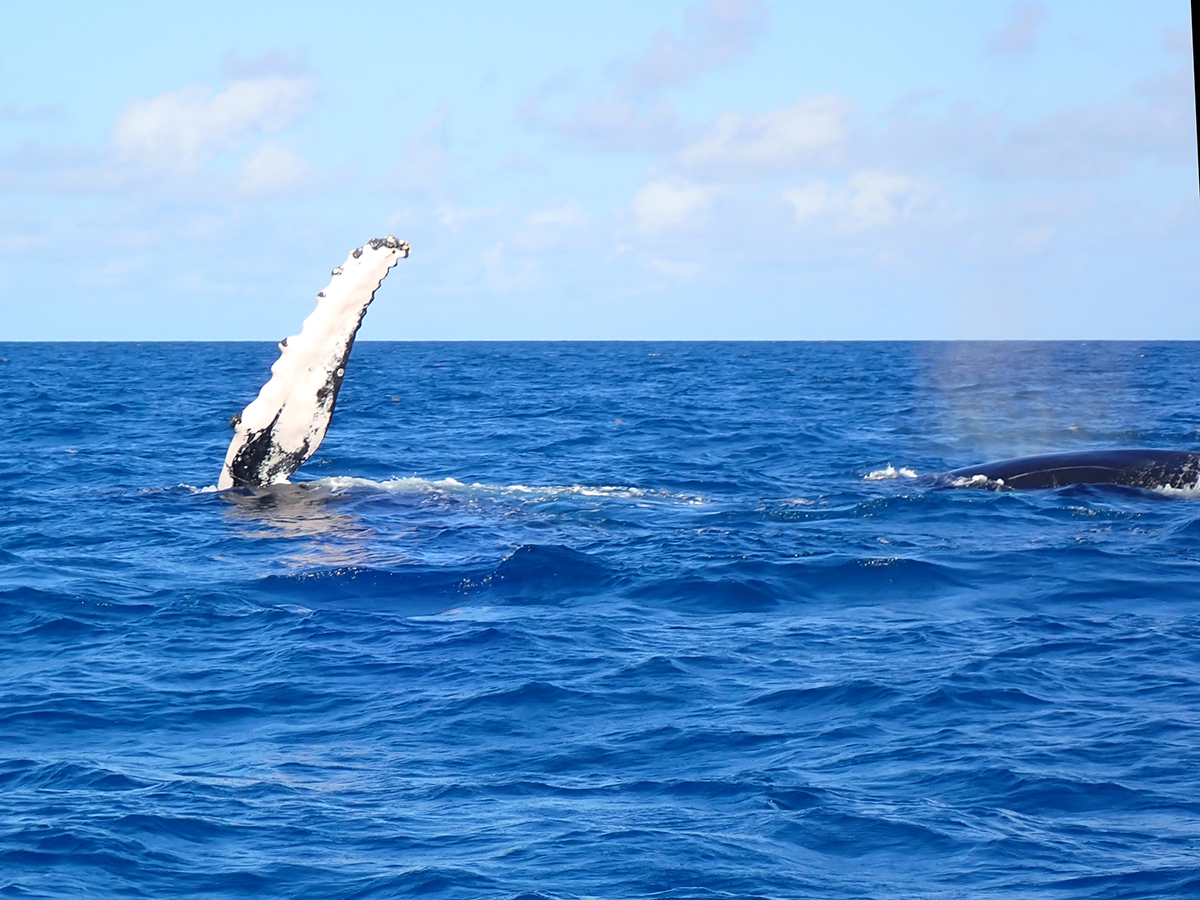