The journey begins in Puerto Plata, the largest city on the Atlantic side of the Dominican Republic and home to a large industrial shipping center. Opini

on varies on the origin of the name, but it is surmised that Puerto Plata took its moniker either from the lucrative Spanish trade in silver, or the way the morning sun glinted silver from its waters. Either way, it is a city of contrasts. To the south sit the forested flanks of Mount Isabel de Torres, and to the north the Atlantic Ocean. Narrow streets lined with faded Victorian facades and tiny shops rub shoulders with broad avenues, bright nightclubs, and a shining swath of oceanfront hotels. Our vessel for the expedition, the Turks and Caicos Explorer II, is docked at Ocean World marina, approximately 30 minutes from the Puerto Plata airport. The Explorer is a 130 ft. custom-designed liveaboard dive boat, housing 20 guests in 10 well-appointed cabins.

We set off for the Silver Bank, the calving and breeding grounds for the humpback whales, an hour or so before midnight. The excitement is palpable for the inaugural journey of the season, but the day has been long and all quickly settle in for sleep. Good fortune prevails and our overnight crossing is gentle, putting us on the bank shortly after sunrise. The crew sets the mooring while the guests enjoy breakfast, then Tom Conlin gives his introductory talk. We’ll be spending 4 1/2 days with the whales, and all must learn the techniques for safely and respectfully approaching them. Distilled from decades of experience and popularized by Tom, the soft-in-water encounter allows us to spend time with the whales on their terms, free from harassment or aggressive moves.

During the first afternoon, guests have a practice run for a soft-in-water encounter, allowing everyone to get used to their equipment and the protocol for entering the water. Time is limited, but we are still able to find several whales and witness some surface activity. Back aboard the Explorer, the elation of the day and a few cocktails brings out the playfulness of the guests.  In a theme that will recur throughout the week, an impromptu dance party forms on the sundeck (ever had the best one-hit wonders from the last three decades stuck in your head for days on end? No? Hmmm).  After dinner and a brief presentation, all head to bed early. Nothing like sunshine, salt air and a few wild dance moves to leave one pleasantly tired! And with plans for sunrise yoga on the deck before heading out, morning will come quickly.

Day Two. The more motivated among us are energized and limber post-yoga, and all are more than ready to head out for the first full day. Tom captains one of the tenders, the Escort, and Denise the other tender, the Challenger. With over 23 seasons and 9 seasons experience on the Silver Bank, respectively, our captains quickly locate the whales. Windy conditions and rolling waves prevail today, perhaps eliciting increased playfulness on the part of the whales. We witness whale after whale breaching on the horizon, but the real treat today is an in-water encounter with a mother and calf. This mom is a little nervous for now, so the interaction is short, but we still get a good glimpse of her massive size and her oddly shaped dorsal fin. She is tender with her heavily marked little calf, moving him off lazily with a nudge. We don’t push her with the interaction, in favor of giving her a positive experience she’ll remember for next time.

Our third day brings a number of morning fly-bys from a large female and heavily scarred male, and then from a mother, calf, and escort (female humpbacks on the Silver Bank are often found in the presence of escorts, or male humpbacks hopingto take advantage of proximity to quickly mate). We also witness three juveniles racing along and playing, with the occasional breach thrown in. And finally, a resting mother and calf. Guests slip into the water and are able to spend several sessions with the pair as they drift slowly along, then a big breach from mama brings an exciting end to that in-water encounter. Midday brings action spicier than the Mexican cuisine – multiple whales breaching and fin-slapping just meters off the Explorer’s starboard side for at least 15 minutes – lunch and entertainment! And finally, the afternoon action includes an exuberant calf showing off with lots of breaching, lob tailing, and fin slapping while mom rests below. 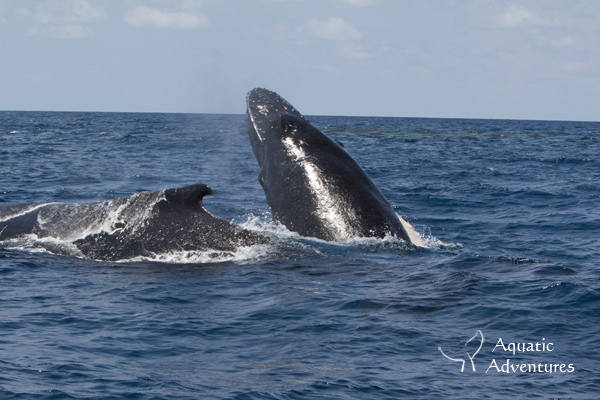 Day Four brings action right out of the gate with a rowdy group encounter. Rowdy groups are composed of male humpbacks vying for mating rights through strength and aggression, and witnessing their formation is always exciting. And then to provide contrast: a mother and her tiny calf, less than a week old and still sporting the folded dorsal fin characteristic of the newly born. The Escort tender group is treated to a visit by a pod of at least a dozen dolphins intermixed with a pair of whales, and both groups spend at least a half hour in-water with a lone male juvenile rolling about in the water. Practicing his own dance moves for when he’s all grown up? Perhaps.

Day Five, and the action keeps getting better and more intimate. The tenders spend a collective hour or more with a mother and very playful calf. Everyone watching was struck by how whales seem to have fun – at least this whale. Rolling and breaching, fin slapping and tail breaching, and the occasional spy hopping too – baby was checking us humans out both above and below the water while mom took a few moments of (undoubtedly much needed) rest away from her exuberant youngster. And then another calf breaches repeatedly nearby, but for a different reason – separated from his mama by a coral head. In response, mama also rises massively, magnificently, trailing water in the wake of her 35 ton bulk. The pair are reunited several moments later and move off together. Both tenders are also treated today to two pairs of sleepers, or whales resting in the water column for 20-30 minutes at a time. Lovely from above, sleepers are particularly impressive as they rise just below the guests for breaths.
All in all, an eventful first week on the Silver Bank. All leave grateful for some magical encounters, good camaraderie, and epic tan lines. One (hopefully) smooth crossing and one more sunset for theguests, and a great start to another season for the Aquatic Adventures crew. Until next week…