Early winter on the Silver Bank is heralded by the return of the humpbacks.  Seas quiet for most of the year awaken again to whale song, as the spectacular mating and calving rituals of these charismatic creatures begins. As the whales have once again migrated great distances to arrive in these warm waters, we too have returned from distant locales to kick off a new season (our 25th!). While late January marks the first Aquatic Adventures journey of the season to the Silver Bank, many of the whales have preceded us by weeks. Some females have even become new moms already; in several instances, we see a tiny dorsal fin arcing alongside mom’s massive one.

Our very first interaction of the season is with just such a new mom and calf pair, accompanied by a patient escort. Although likely only a couple of weeks old, this baby is quite precocious, and closely circles the group several times. Very young calves will generally stick quite close to mom, peeking shyly at the snorkelers; this little one is unusually adventurous. It will be interesting to see if we encounter this youngster again, and if his outsized personality keeps track with his physical growth.

The following day brings a second mother and calf pair with escort, but with an atypical twist: this baby is a yearling, not a newborn. Humpback whale calves typically start to mix nursing and feeding at 6 months (and are weaned completely within several more months), but occasionally a calf will stay with its mother through an additional winter. This calf demonstrates some babyish traits typical of the very young, but also shows an older calf’s tendency to get up close and personal. Indeed, the large juvenile calf still tucks himself safely below mom’s pec fin, but emerges frequently to chase off the escort and approach us. Several 25 minute sessions in the water later, we’ve all had some extremely close encounters with “baby”.

In another dynamic encounter shortly after, a pair of curious adults grants us dozens of slow passes, rolling on several occasions to expose their bellies. Apparently interested in the boat, they circle back over and over again. They often pass just below us as well, providing thrillingly near views from every angle. Although rarely settling for long, this pair is far from disturbed by our presence. Instead, they seem to be actively engaging us. 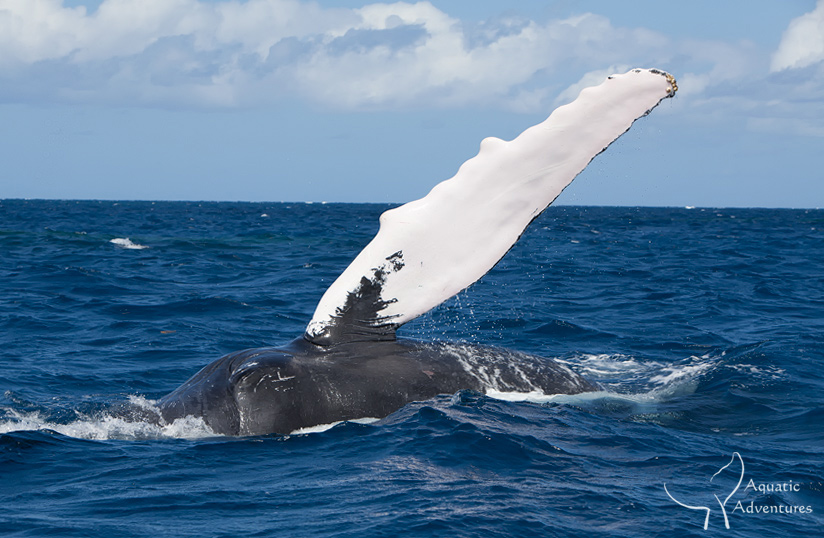 Midweek squalls lend dark drama to the skies, but we are undeterred. And a  last in-water encounter this week certainly rewards us for our perseverance: a mother, calf and escort trio circling us and the boat multiple times, pausing briefly to rest, then circling again. Mom is repeatedly interested in the boat, even briefly touching the keel, but escort (perhaps jealous of the interloper) repeatedly pushes her away. Later, mom and baby settle nicely for awhile, but escort makes his presence felt again with a series of nearby breaches and fin slaps. It’s back to the boat for us at this point, but all enjoy the aerial display.

All in all, a great start to the season!