The song of the humpback whale is unique among cetacean vocalizations in its complexity. Indeed, it has been described by one acoustics researcher as “strikingly similar” to human musical compositions. Like us, humpback whales appear to utilize the larynx to produce sound, though they lack vocal cords like ours; the exact mechanism of sound production remains unknown. We do know that the song follows a hierarchical structure, with distinct phrases and themes, and in its entirety may last up to 30 minutes. Consistent among humpbacks in a given population, the song nevertheless slowly evolves; notes rise or flatten, combinations change.

This video taken during week four has a soundtrack courtesy of a male humpback whale: Bounce and Baby

Mysterious and haunting, humpback song is detectable through the aquatic realm for hundreds or even thousands of miles. Though its exact purpose remains unclear, it’s thought that it may play a role in mate selection (only male humpbacks are known with certainty to sing; the song may help males communicate fitness to females). This week on the Silver Bank, we encounter a male singer trailing after a mother and calf pair. Mom and baby drift along at the surface, eyes closed, while the male emits a variety of squeaks and whoops below. The song is powerful enough to be felt, and (at least to us) sounds plaintive. Is she indifferent? Asleep? Or do her stillness and closed eyes indicate rapture? Later in the week, we encounter another singer, his underwater notes audible through the boat hull. This one appears to be alone and on the move, a traveling one-man band.

In addition to singers, we have another fantastic week of mother and calf interactions. On one day, we spend at least 6 hours with a single mother and calf. This big baby seems to have more control than most youngsters, and his impressive grace is on display for hours as he surfaces repetitively among us. On another day, we spend 5 hours with a mother who orients herself vertically, nose to the seafloor and pec fins splayed. Her baby tries to mimic her position, but without mom’s pec fin to slip beneath she keeps floating tail first to the surface. It’s not clear why this mom has assumed her atypical position, but one might posit that she is demonstrating some tough love, encouraging baby to practice her buoyancy. Midway through the latter encounter, a lovely surprise: a second mother & calf (with escort) who pass directly below us, interacting only briefly with “our” whales. 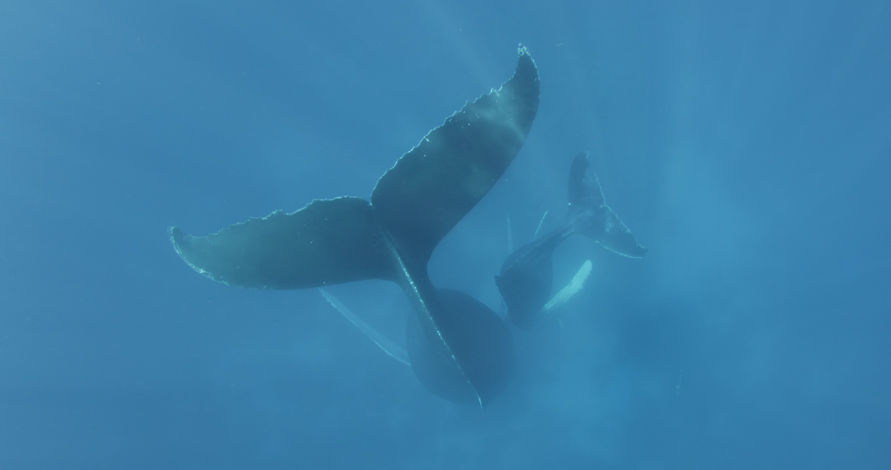 Another mother and calf encounter this week exemplifies the saying “anything can happen at any time.” We are with the pair for two hours before the encounter is interrupted by the arrival of four more whales: a second mother, calf and escort trio, and a challenger. The challenger has clearly been battling in recent days for mating rights; his dorsal fin is torn nearly free from his body, the wound still raw. He immediately joins the original mom and calf pair, then both trios begin interacting with us: swirling around, trailing off, turning to come right back again. There are multiple spy hops and some impressive posturing from the males; the babies frequently dart towards one another. Though the scene appears disordered from above, all six whales circle us with exceptional grace and calm, rarely impeding on our space and never acting in the least way threatening towards us. Indeed, they seem overwhelmingly curious, passing just below us and rolling sideways for a better look.  All six whales stick around for at least an hour, then abruptly depart.

Surface activity doesn’t disappoint this week, either: we encounter a mother and calf pair that aren’t keen on us being in the water with them, but do oblige with some fantastic tail lobbing and at least 30 breaches. On our last day, the week’s gorgeous weather and calm waters concede to rougher seas, and it’s deemed too rough (for the first time this season) to go out in the tenders. But even with this setback, expectations are more than met during an impressive and unique week on the Silver Bank!

Just 1 more week until this season with the whales on the Silver Bank is done!  Just like the whales know they’ll return every year, so do we!  2015 is Aquatic Adventures’ 25th year providing guests the rare opportunity to observe these majestic mammals in their natural habitat during their mating and calving season.  Join us for an adventure of a lifetime! For schedule and availability, click here.